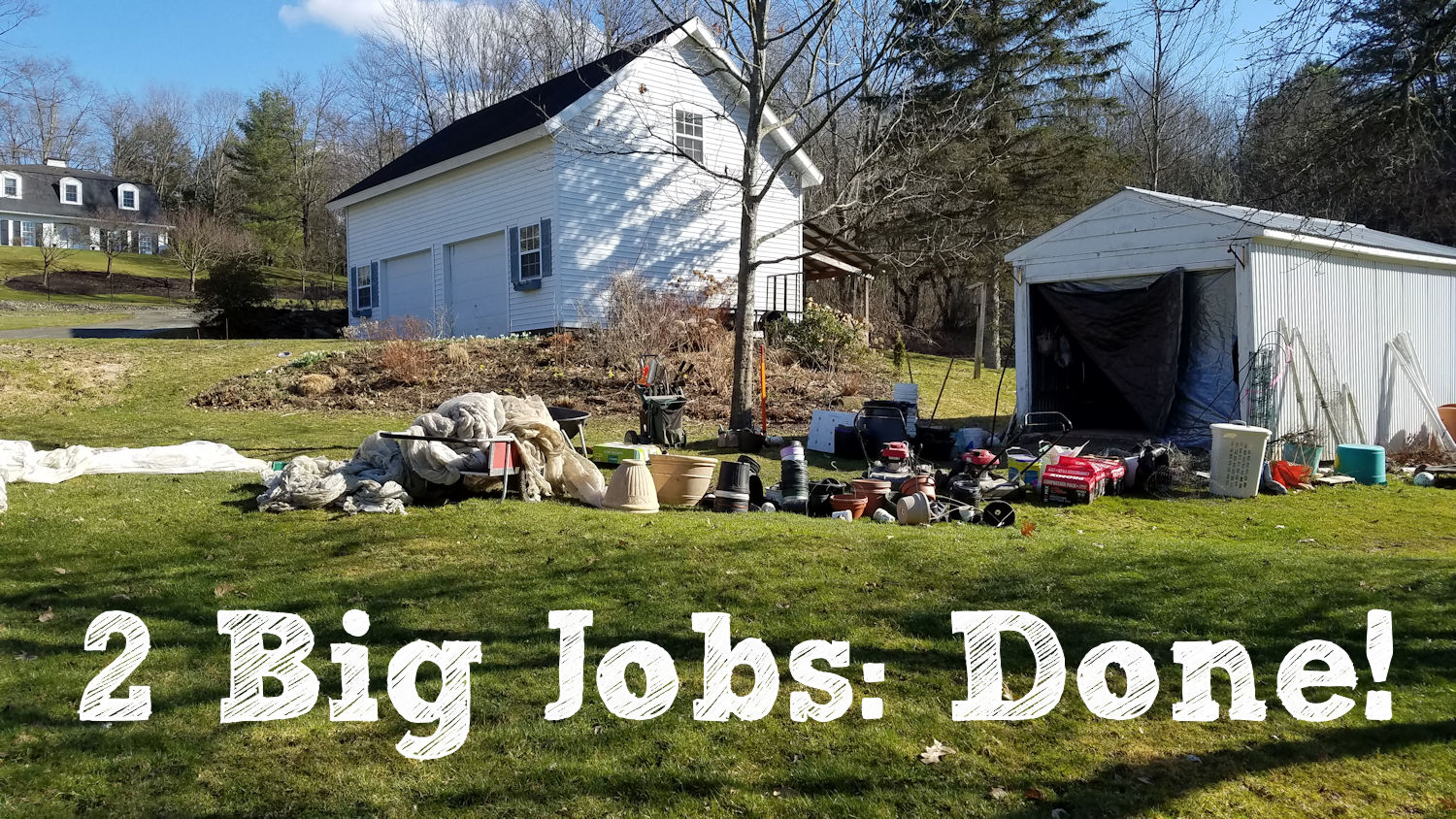 I am so pleased to get both of these chores done–in the same week, no less–that I just had to share it with you.

My first project was the seed-starting area. This is a corner of the basement outfitted with discarded kitchen cabinets and a homemade seed starting stand. And it’s not just for starting seeds; it’s also the houseplant tending station.

In the bottom right corner you can see just a bit of our newspaper stockpile. The kitty litter bins have potting soil, grit, and sand. The cabinet on the left has a slide-out bottom which holds a bucket of seed-starting mix as well as small bags of vermiculite and perlite. What this set-up doesn’t have? Water! Anything that needs to be watered must be hauled upstairs, or the water must be carried downstairs in a container.

Cleaning up in the basement can be done anytime (though in the middle of winter it’s pretty cold down there), but the garden shed needs good weather and a big chunk of time. It’s often difficult to coordinate both of those with the requisite ambition, but this past week everything lined up.

I can’t reorganize and clean the garden shed without taking everything out, sweeping it out, and then putting everything I’m keeping back in. I used to be able to do it in one long, tiring day, but this year it took two afternoons. Note to self: put the things you use most often back into the shed last, because you’ll want them near the front.

This shed was here when we moved in. It functions as a potting shed, tool storage and equipment garage. There is a bin of miscellaneous toys for young visitors as well. I find it isn’t bright enough for me to see what I’m doing, so when I actually have to pot something, I bring it out on the lawn. And I keep a head lamp on a hook by the entrance, in case I have to hunt for something buried in the back.

The hamper has rolled up pieces of floating row cover (Reemay, Agrobon, frost cloth, etc.). The kitty litter bins in the back are empty, waiting to be filled with whatever new soil amendment I drag home. Most of the other stuff I think you can figure out.

This is just a better view of the potting bench, once again, a scavenged kitchen cabinet. The hanging baskets are the only unfinished part of the job. I want to drill screws into the rafters and hang them there. I wind up using one hanging basket to grow cuttings of sweet potato vine over the winter, and the rest I find handy for starting dahlias, because the containers are shallow but wide. So maybe I should just hang the one, and take the hangers off the rest and stack them. It will soon be time to start dahlias.

I’ve already rewarded myself with a bowl of ice cream so you don’t need to send me any gold stars. I’m not very good at keeping things tidy and organized, so I don’t expect this wondrous achievement to last long. That’s why I’m recording it for posterity here!