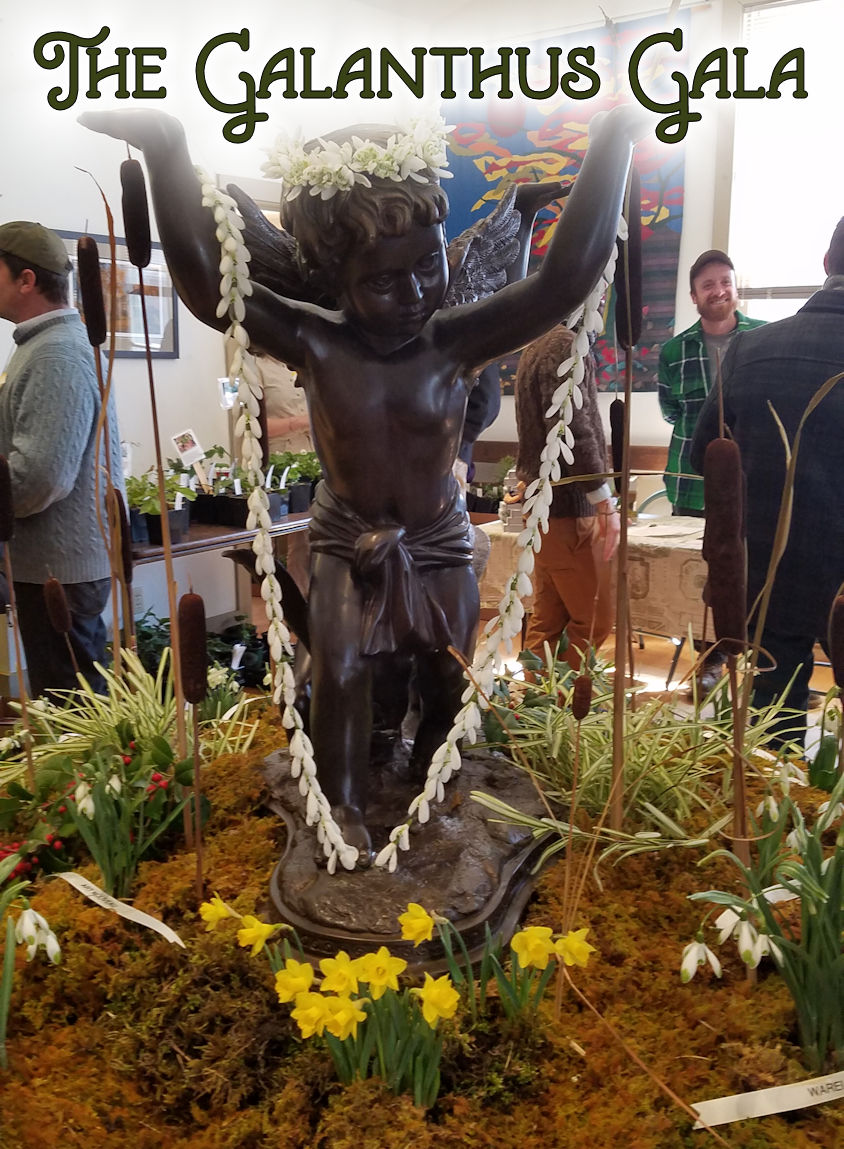 In 1997, Mona Wysocki gave me a “sod” of snowdrops (Galanthus nivalis) about the size of a salad plate. (I call it a “sod” because it was as densely packed with snowdrops as a piece of lawn is packed with grass.) I carefully separated the bulbs and replanted them about six inches apart. (Detailed instructions here.) Twenty-three years later, they have formed their own sod.

Eight years ago we moved to a new house and garden, and I planted some of those same snowdrops here.

A few years ago I joined the Snowdrops in American Gardens Facebook group. It is a friendly group, quite amenable to “off-topic” posts–especially when snowdrops aren’t blooming. I have gotten familiar with the gardens of several members and have even traded plants through the mail with a few of them.

David Culp, a member of the group and an obsessive snowdrop collector, organized the first Galanthus Gala in Pennsylvania four years ago. (I wrote a brief review of his first book here.) After three years of seeing pictures of this event on Facebook, showing people I’d dearly like to meet in person and photos of rare and choice plants offered for sale, in early March I made the three hour trip to attend the fourth Galanthus Gala.

But I had a plan.

Remembering how much Mona’s gift of snowdrops meant to me, I wanted to pass a little of that magic on to others. My son and his wife now live in our family’s former home. I asked my daughter-in-law if I might dig some of those original snowdrops up (a sod), and I did so two days before the gala. I portioned them into small zip-closure bags–perhaps three dozen bags in all with probably five bulbs in each. My plan was to give them out as tokens of friendship to my online gardening friends–and to anyone else who seemed interested.

When I think of the word “gala” I imagine a formal event with the gentlemen in tuxes and the ladies in floor-length gowns. This gala was packed with gardeners in casual (but clean) clothes desperately trying to buy their must-have plant before someone else did. I had imagined I would know most of the people there and we’d have plenty of time for chit-chat. In reality it was subway-at-rush-hour packed–I could scarcely move–and most of the people I knew were either behind a table frantically selling plants–or nowhere to be seen.

Undeterred, I started handing out snowdrops. “Where did you get that?” a stranger asked me, thinking I had purchased a basketful of snowdrops. “They’re from my garden. Here, have one.” Her eyes widened. “Are you serious? Thank you so much!” The distribution was as spontaneous and random as that.

The gala always features talks by one or more experts. This year Alan Street of Avon Bulbs in Britain gave two lectures in an adjacent building. When the first lecture was announced, the sales room cleared out considerably. What a relief! (I had planned to attend both lectures, but I confess I didn’t understand the announcement David Culp made at the top of his lungs.) With the crowd thinned out, I finally got to browse the tables to see what was being offered.

Yes, this is a Galanthus Gala, but I have generally found that those who love snowdrops intensely love many plants intensely. They are used to paying top dollar for rare and unique snowdrops and likewise don’t blanch at opening their wallets for other rare and unique plants–especially if they are good companions for snowdrops. Don’t you worry, there were lots of snowdrops for sale.

I did attend Alan Bloom’s second lecture and his definition of a galanthophile is “someone who can’t stop buying snowdrops.” By this definition, I am not a galanthophile. I won’t pay more for a snowdrop than I would for a colchicum corm. Yet I was astounded to realize I grow twenty-two different snowdrops when I made a list the night before the gala. (See many of them here.) Some were purchased and some were gifts from galanthophile friends.

Truthfully, I was more tempted by the other plants. So many choices! I tried to focus on plants for the Secret Garden. I brought home Trillium flexipes–which is native to my county–and Trillium vaseyi, and Anemonella ‘Cameo’. I also purchased one of David Culp’s Brandywine hellebores as a souvenir of my trip.

When the first lecture was over, some people left and many others wandered back to the sales building, where lunch was also being sold. I caught up with many of my Facebook friends then and shared my snowdrops with them. I’m sure they all had this particular snowdrop growing in their gardens already. Galanthus nivalis is called the common snowdrop, after all. But they accepted it as the token of friendship that I intended, and I like to think my common snowdrop is an especially vigorous form that will eventually makes “sods” in their own gardens.

The next Galanthus Gala is planned for March 6, 2021. This event is not widely advertised. If you are on Facebook, like the Galanthus Gala page or join the Snowdrops in American Gardens Facebook group to keep abreast of the details. If you’re not on Facebook, visit their website, where there will soon be a form to subscribe to their email list.