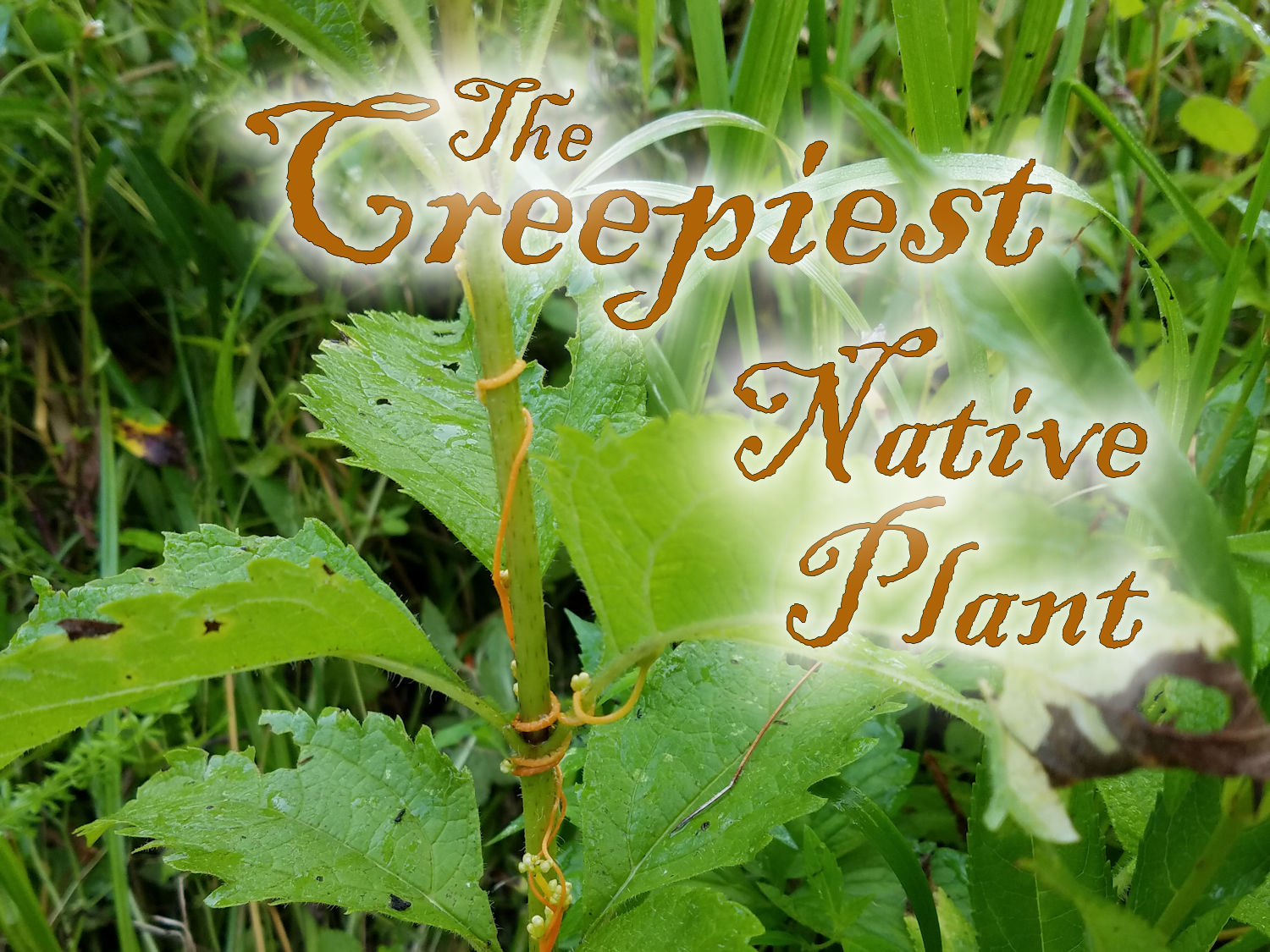 It’s a scene straight out of a horror movie: a thread-like orange stem emerges from the ground, circling around counter-clockwise, searching by smell* for a potential victim. When it finds an unsuspecting, vulnerable plant, it wraps around it and pierces the victim’s stem, sucking water and nutrients from the host plant like a vampire. This nightmare is called field dodder (Cuscuta campestris). It’s the creepiest native plant I know! 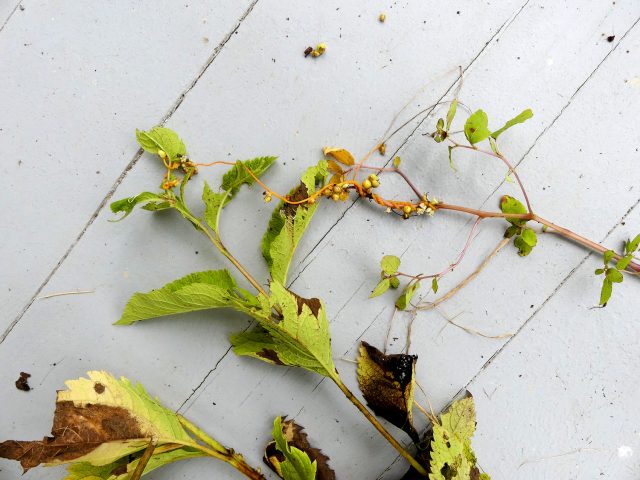 See how those orange stems are reaching out, searching for its next victim?

It has no roots. It has no leaves. It has no chlorophyll. It is a complete and utter parasite, weakening its host, reducing its flowering and fruiting and making it more vulnerable to viral diseases. As soon as it has pierced its victim, it sends out more stems in search of additional victims. One seed can produce over 720 meters of stem in four months! Witches hair is another name for the dense, multi-branched, matted vines. 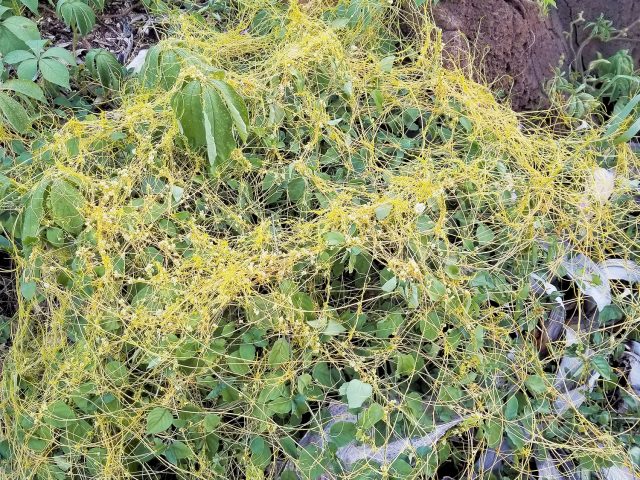 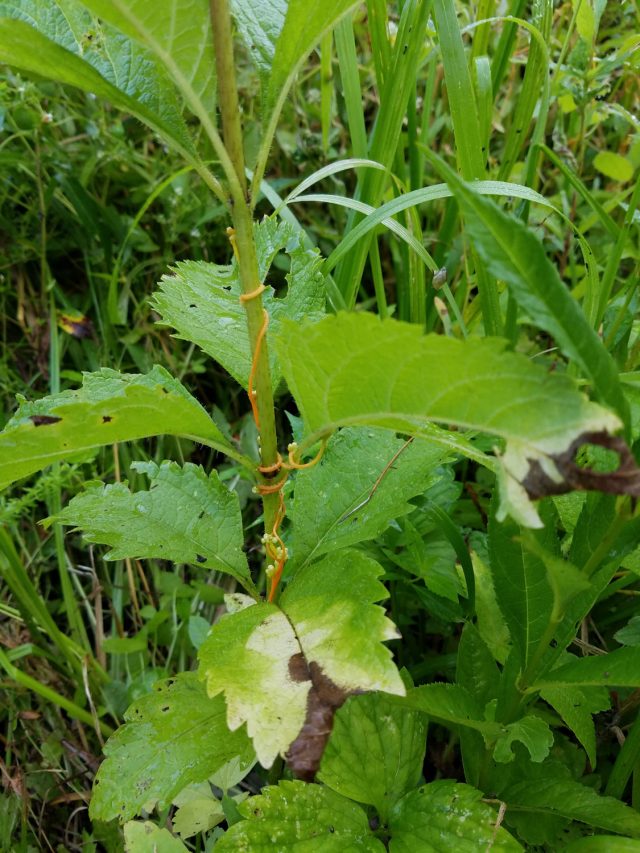 So you can imagine my dismay when I found this by the used-to-be-pond, wrapped around my one and only cardinal flower.

It creeped me out.
The only way to eradicate dodder is to pull up the host plant. I didn’t want to pull up my precious cardinal flower, so I cut it off at the base and hoped that was good enough. I also searched the area for other plants in dodder’s stranglehold and pulled them up. For a plant that’s supposed to be such a nightmare, I didn’t find that much. That wasn’t too reassuring, as I wasn’t sure if I just hadn’t looked hard enough or had indeed caught it early. I’ll have to revisit the area next year to see if I find more. 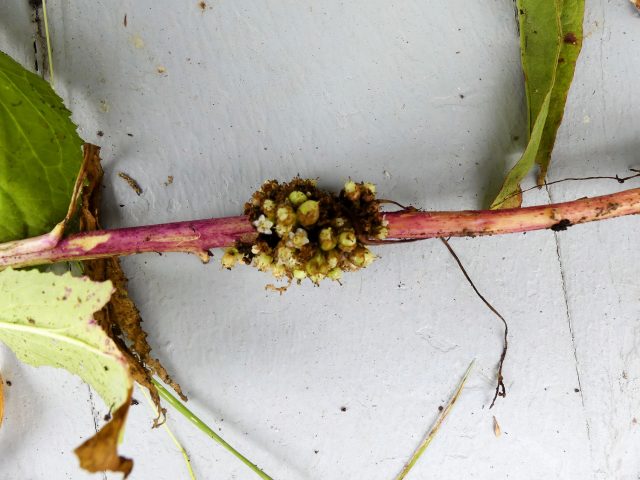 Of course, it’s best to pull the host plants before the dodder has gone to seed. Here you can see both flowers and developing seed capsules. (Click to enlarge)

Dodder is an annual, but it makes a lot of seed. Once the seed gets wet, it becomes sticky, and so easily travels on birds, other animals, and machinery. If it infests an agricultural field, it can drastically reduce yields. There are many species of dodder and many of those most harmful to crops are not native. However, our native dodder is considered invasive in many countries around the world. 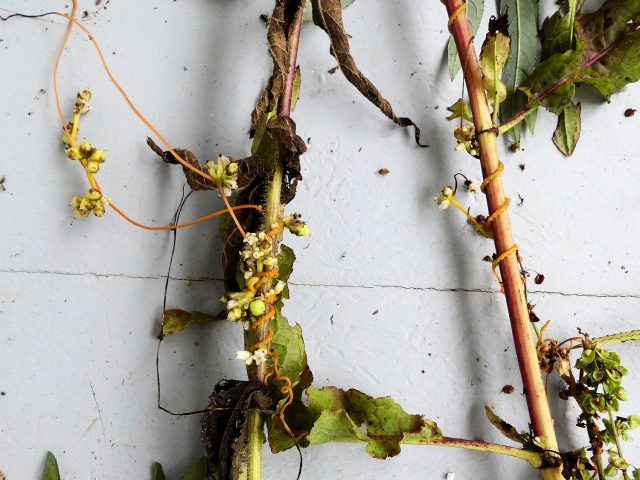 Halloween creepy. I found the dodder and took these pictures in August, but thought it made the perfect October post for Wildflower Wednesday.

*It detects volatile chemicals released by the (potential) host plant and grows toward them. (Don’t believe me? Read this.) We use our nose to detect volatile chemicals in the air and we call it smelling. So I’m saying dodder finds its victims by smell, even though it doesn’t have a nose.