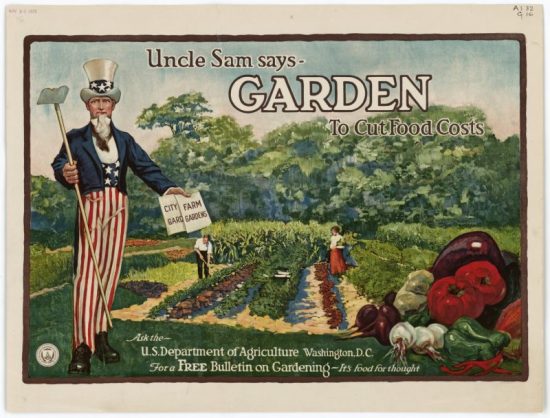 Neither sorrow nor fear has diminished home gardening’s potential to heal during this pandemic spring. Chris Beytes of Grower Talks, the respected commercial trade magazine, has been keeping tabs on retail garden centers for the last twelve years. This year, weekly surveys of growers and retailers across the United States have been surprisingly positive. One grower reported, “We will run out of plants before we run out of spring.”

Susan Harris recently posted a fascinating Garden Rant piece about Princeton researchers who discovered that a home vegetable garden can make you as happy as biking or walking. Scott Beuerlein wrote about the joy, and perhaps even the necessity, of vegetable gardens—without forsaking pollinators.

The world has taken a painful hit this spring. The mood is bleak.

There have been few bright spots, but at least gardening roared back, and worldwide carbon emissions were down 17%,

Are we witnessing the arrival of the future?

What kind of future?

If only a breath of fresh air were a birthright and not a corporate poker chip.

Of course, more trees would help.

In a recent New York Times opinion piece, Collin O’Mara, the president and C.E.O. of the National Wildlife Federation, offered a stimulus idea to arm unemployed young people with spades and set loose a “Tree Army.”

And there is the well-researched Mother Jones piece that should be mandatory reading for anyone interested in the history of American gardens:

On the heels of this article, came news that food prices jumped 2.6% in April, the largest monthly increase in 46 years.

Maybe it’s time to explore ownership of your own food production—at least a small portion. It won’t be too painful, and your effort might make you happier.

Or go foraging. My daughter Molly, who has dug deep on edible wild plants, has opened the door wide open to endless possibilities.  On Monday, I discovered a beautiful and edible native onion, Allium canadense, at the edge of our Salvisa, Kentucky woodlands.

I wake up most mornings on the sunny side, even if I’m not sure what day it is. This spring, I dreamed of a new frontier across the fruited plains, both front and back yards planted with loads of native pollinators, peonies and Hibiscus blooms bigger than dinner plates, where Mr. Stripey heirloom tomatoes are sliced up for sandwiches from July until frost.

There is, however, the dark voice in my head, telling me I shouldn’t hold my breath for cleaner air. Covid-19 will be vanquished, at some point, and with it, I fear many new gardeners will run out of steam.

Planting lavenders and lima beans require a leap of faith and regular periodic attention. Forget the myth of little or no maintenance. You’ll need to tend your garden—religiously.

I once owned a perennial nursery. I understand the vast unknown of planting a garden for the first time—or the 50th time. On the front end, in April and May, there is little that can go wrong. The voracious Colorado potato beetle doesn’t show up until June

I know the look of fear in a new gardener’s eyes when they face the daunting task of where to start, especially what to plant. So often a customer would come up to me, back in those nursery days, holding a bleeding heart in their hands, and want to know if the plant was going to live.

“Live? What do you mean live?”

“Is it going to live forever?” they would ask.

I shied away from the truth.

My answer was ambiguous: “Well, that’s hard to say.”

I patiently outlined the obvious, mind-numbing caveats about watering, but not too much. I warned of winter temperatures, the likes of which no one had ever seen. And hot, dry summer spells that tested the “dark night of the soul.” They were backpedaling by the time I got to Biblical locust plagues.

They put the bleeding-heart back on the table, walked to their car and never looked back.

I found one work-around that wasn’t a complete turnoff. Frustrated late one day, pressed with the same question about life ever after, I promised an unsuspecting customer that all of his plants would survive—if it was God’s will.

The clouds parted. There was hope.

No one who believed in God’s will ever called later to say their plant had died.  How could they? “Sir, are you suggesting that I had something (anything) to do with your plant’s death? You want a refund? Are you kidding?”

I was, in fact, unfailingly generous with plant replacements, even though there was not a blessed thing I could do with my precious babies once they left the nursery. I wished them Godspeed.

This pandemic shall pass. And with patience and discipline, one day, your long-forsaken yard, shall become a fruitful paradise.

Will there ever be racial and economic justice? Don’t give up on your dreams.

You’ll take a few hits. We all do. Don’t sweat it.

Go after your summer weeds early in the morning before it heats up.

Fill your hearts with love.

The Arrival of the Future originally appeared on GardenRant on June 3, 2020.

The post The Arrival of the Future appeared first on GardenRant.