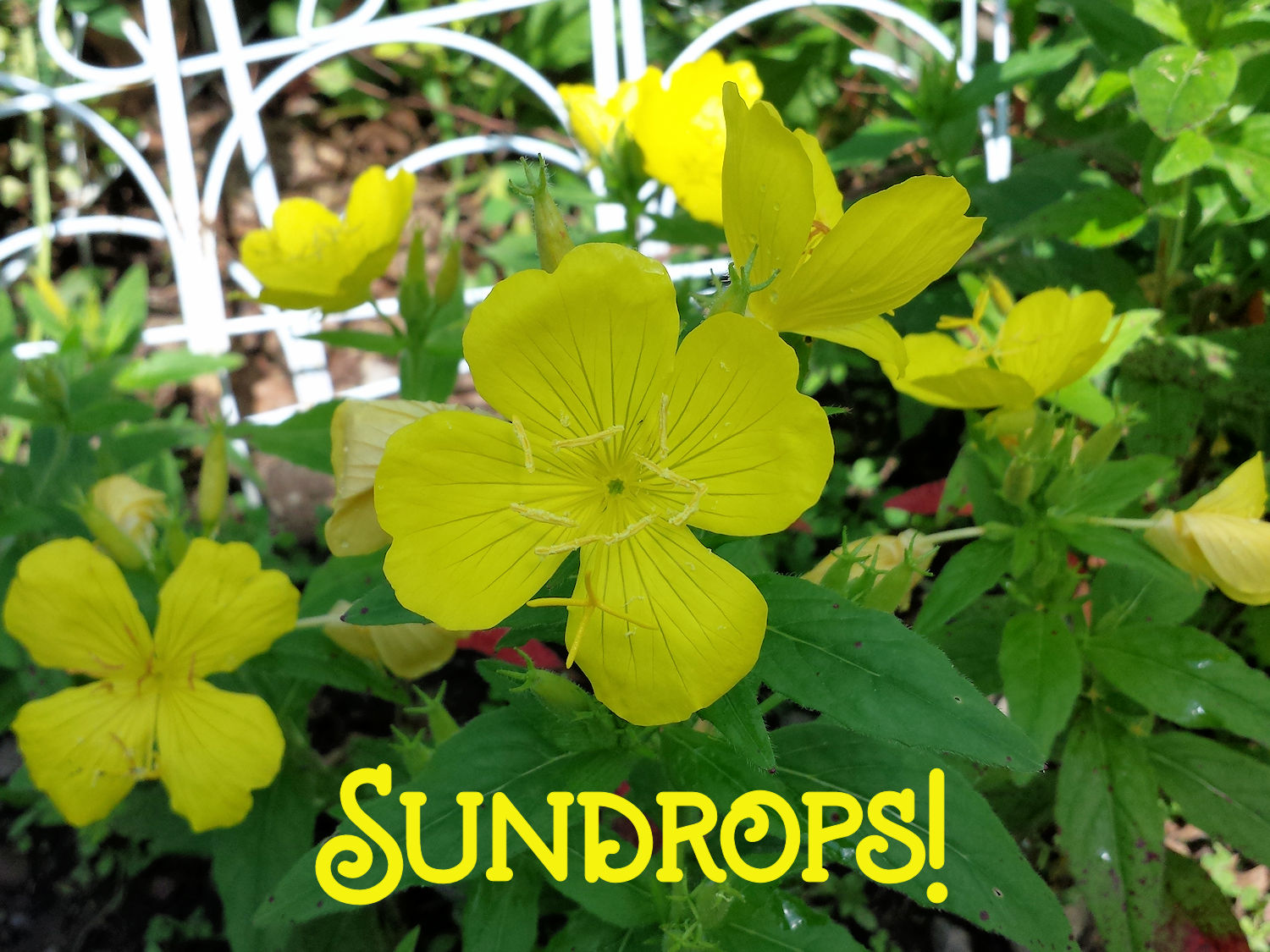 It’s easy to take sundrops for granted, because they’re so easy to grow. Here I was, trying to think of a plant to feature for Wildflower Wednesday. I couldn’t think of a single native plant. Then I saw Beth Stetenfeld’s post on prairie sundrops, and slapped my forehead. Of course! Sundrops are native plants!

When we moved here, sundrops were already growing in the Slope Garden, the only garden bed created by the previous owners. 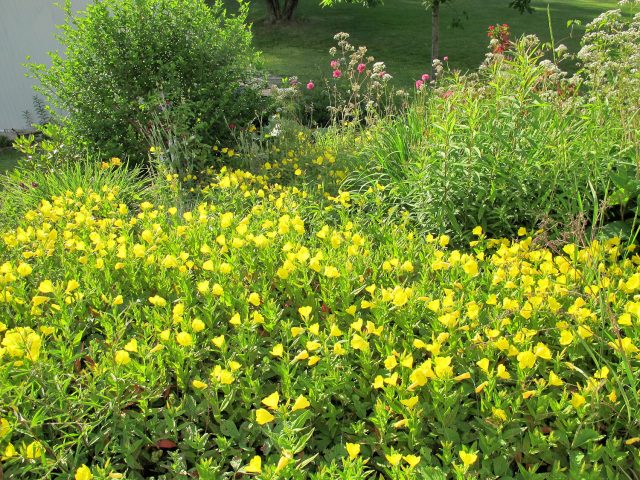 They weren’t merely growing in the Slope Garden, they were taking it over!

Be it daffodils, forsythia, or sundrops–I am a sucker for pure, sunshine yellow. I did want to keep them. Uh–at least some of them. But I wanted to transition the Slope Garden to shrubs and ornamental grasses for easier maintenance, so I needed a new place to grow sundrops.

It may have already occurred to you that sundrops are inclined to spread. Fortunately they are also shallow-rooted. 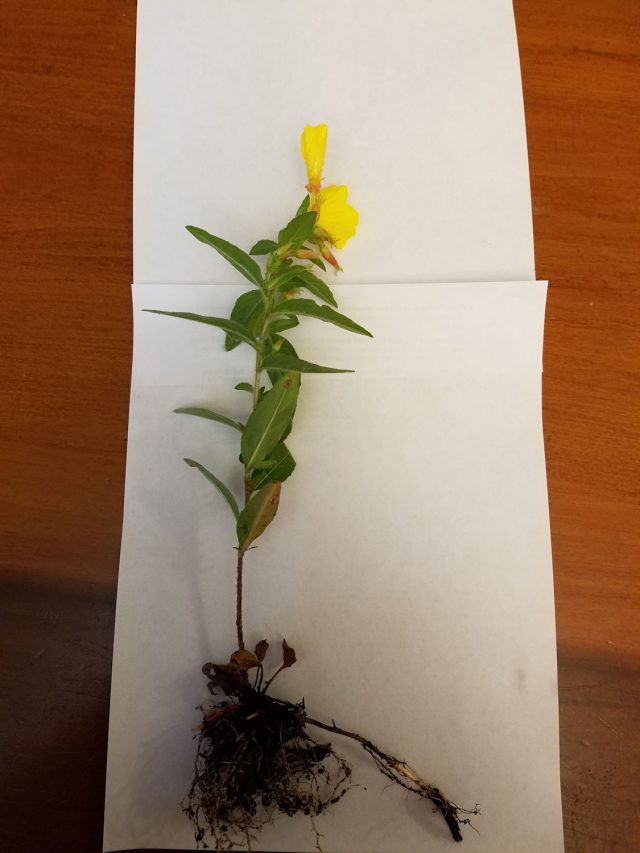 You can see there isn’t much to the roots, but even a young plant sends out runners. Those shallow roots make them good placeholder plants.

And they are tough. Do you know how tough they are? They are one of the very first passalong plants I received from another gardener. She bent over, yanked three or four from the ground, and just handed them to me. I couldn’t believe it. No digging with a trowel, no trying to keep soil on the roots. She must have seen the shocked look on my face. “Oh, don’t worry. Stick them in the ground when you get home, and they’ll be fine.” And they were.

If that kind of toughness sounds like a weed to you, well . . . some gardeners won’t let sundrops into their garden. But me, I love that sunshine yellow, and I figured out a better place to let them romp. Remember all those daffodils I planted along the road? 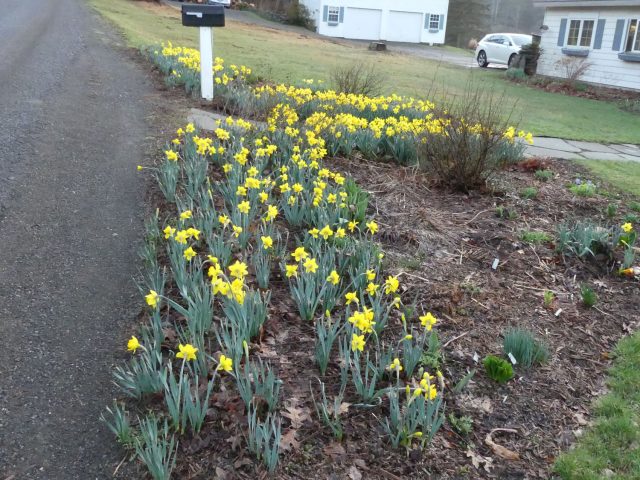 I dug up the sundrops and interplanted them with the daffodils. 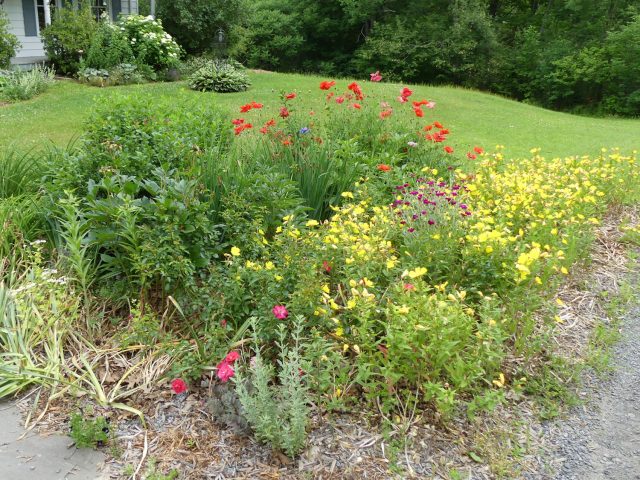 This is the same bed as the previous photo, looking from the mailbox corner. The daffodils are going dormant, and the sundrops are at their peak.

The sundrops’ toughness stands them in good stead at the edge of the road. Snow plows pile snow here in the winter. Reflected heat from the road bakes this area in the summer. It doesn’t faze the sundrops one bit. They haven’t choked out all the weeds, but this area is far less weedy than it otherwise would be. To check their spread, once in early spring, and once in late fall, I pull out the plants that have crept beyond their allotted area. In a dry year I might cut down all the flowering stalks and leave the basal rosettes after the daffodil foliage dies down. But so far it’s taken the daffs so long to finally go dormant (into August sometimes!), and the sundrop foliage has remained green, that I haven’t bothered with a trim.

This gives me a swath of yellow in late April/early May with the daffodils, and another swath of yellow with the sundrops in late June/early July. After that, the daylilies in these beds take over. And guess what color they are?

A sundrop by any other name . . . would just be confusing

So far I’ve just referred to these plants by their common name. That’s because I’m not 100% sure of the botanical name. The genus is Oenothera, of that I am sure. I think it’s Oenothera fruticosa, but Beth’s prairie sundrops, Oenothera pilosella, look very similar. What’s the difference between them? According to the New England Wildflower Society, “Oenothera fruticosa: with sepal appendages mostly shorter than 1 mm and erect, capsules clavate to obpyramidal in outline, stipitate, and plants subglabrous to sparsely pubescent with hairs mostly shorter than 1 mm (vs. O. pilosella, with sepal appendages mostly 1–4 mm long and divergent, capsules linear-elliptic or elliptic to narrow-clavate in outline, sessile or short-stipitate, and plants conspicuously pubescent with hairs mostly 1–3 mm long).” I don’t even know what a sepal appendage is. And this plant just might be 3mm hairy. 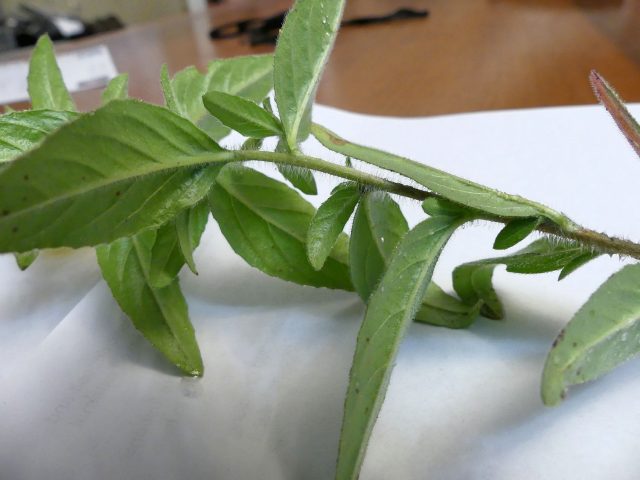 Can you see the hairs on the stem?

But O. fruticosa is supposed to be the narrow-leaved evening primrose (whose flowers open in the day) and the leaves on my plant aren’t narrow as depicted in some (but not all) of the pictures here. William Cullina, in Growing and Propagating Wildflowers of the United States and Canada, says “O. tetragona (Northern Sundrops) is very similar and often confused in the trade. It hails from farther north, ranging up to Nova Scotia and Quebec.” That sounds like my climate, but he doesn’t say how O. tetragona is different. Allan Armitage (Native Plants for North American Gardens) is more helpful. O. fruticosa “subsp. glauca (at one time called Oenothera tetragona and O. youngii) differs by having broader, grayer leaves and smoother stems and leaves than the species.” Broader, definitely; grayer, possibly; smoother?–well, I would have to see the species before I would know if my plants were smoother.

You see? That’s why in this case I stick to the common name. And if by some chance you can’t find a gardener who will give you some, you might look for one of the cultivars mentioned by Armitage: ‘Erica Robin,’ ‘Fyrverkeri’ (‘Fireworks’), ‘Sonnenwende’ (‘Solstice’), ‘Hoheslicht’ (‘Highlight’), ‘Lady Brookeborough,’ or ‘Yellow River.’

I agree with Cullina: “[Sundrops] have a buttercup cheerfulness about them if you have room to accommodate their wandering ways.” Even if you don’t want them in your “civilized” garden, surely there’s a little spot by the mailbox or the side of the garage that could stand a bit of botanical sunshine. Don’t worry, they’re easy to pull up! 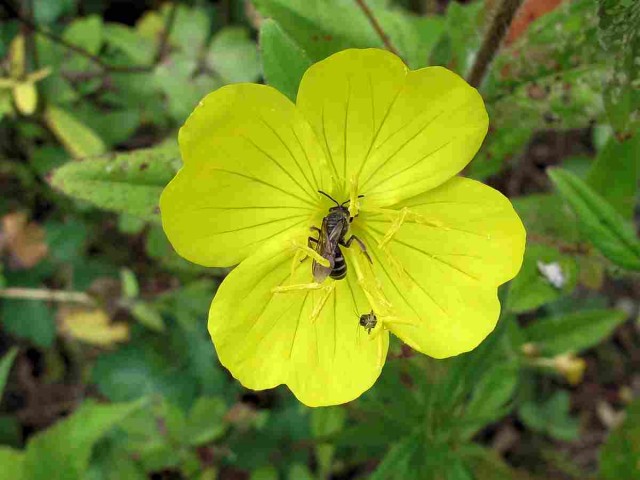 And they support pollinators!

p class=”note”>Posted for Wildflower Wednesday, created by Gail of Clay and Limestone, to share wildflowers/native plants no matter where you garden in the blogosphere.