Snowdrops: Plant The Earliest Flowers Where The Snow Melts First 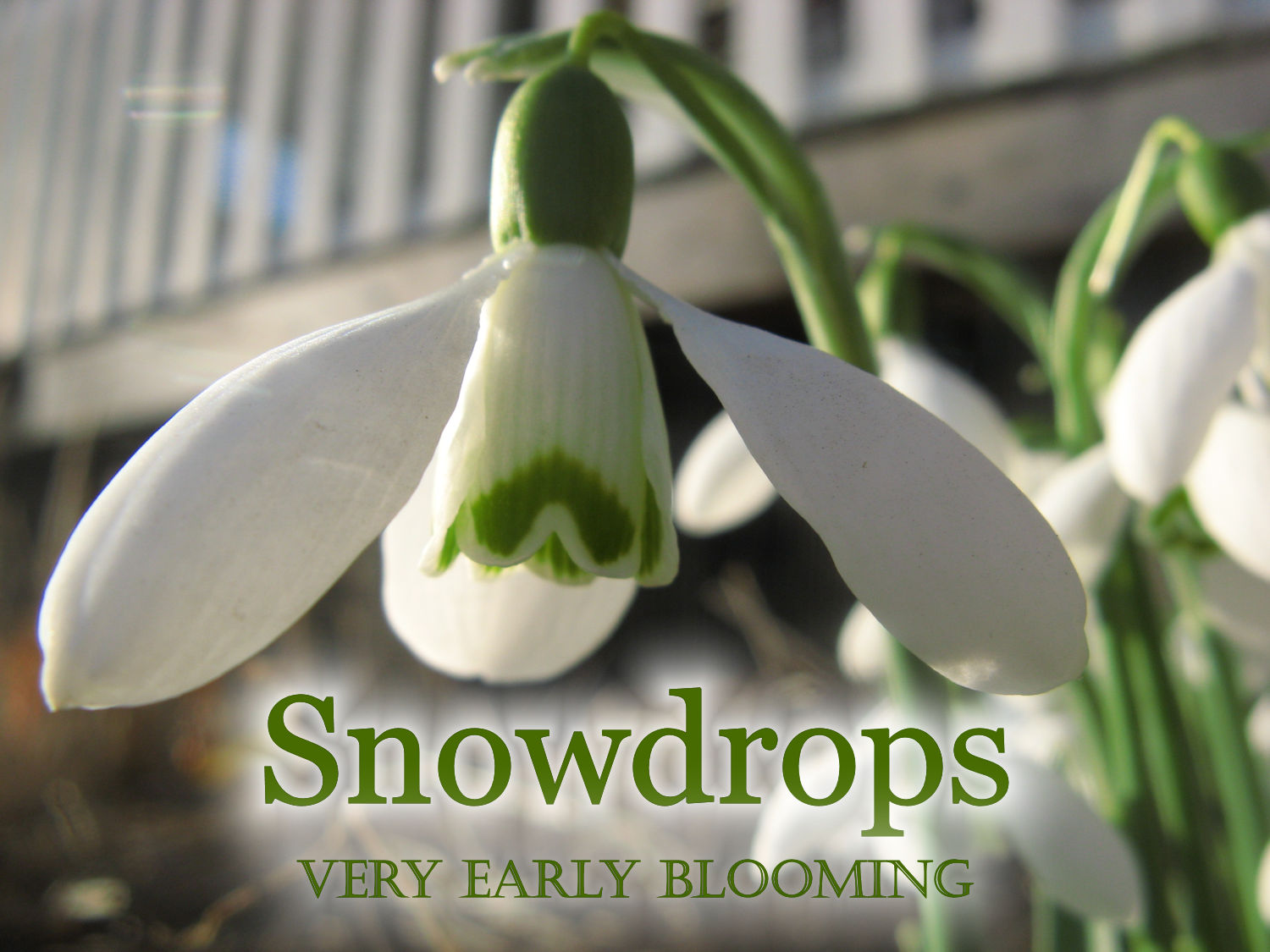 This is the second in a series of posts encouraging you to plant the earliest-blooming flowers where the snow melts first. When it comes time to plant these flowers, you won’t remember where the snow melted first unless you take photos as it’s melting. If your snow is gone, write down what you can remember of the early-melting locations and use these suggestions if all else fails.

Snowdrops are tied with winter aconites for the prize of very-first-bloom. They usually emerge from the ground well before the aconites do, millimeter by millimeter, but won’t actually open their flowers until the temperature reaches 50°F. Winter aconites are jack rabbits by comparison, emerging and blooming in the space of twenty-four hours when conditions are right. Of course you should grow both!

Snowdrops have become quite the “it” flower and single bulbs of rare cultivars can go for breathtaking prices. But save your breath and your pocketbook and invest in the varieties that multiply quickly, such as those described below. Buy a few and pretty soon you’ll have enough to make a patch. And a patch will be visible from inside the house. Just sayin’.

The first snowdrops I ever got were given to me by a gardening friend. She had found them growing “in the wild,” presumably where a house had once stood. I later learned they were the common snowdrop, Galanthus nivalis, and they did very well for me. 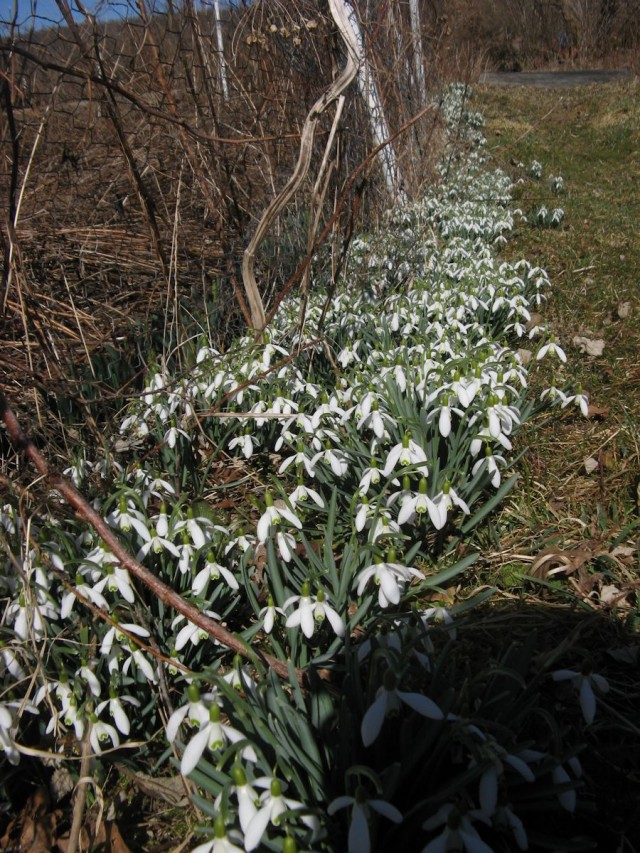 I divided up that original clump of snowdrops and planted them singly along this path (pictured above). The singletons multiplied and eventually became a river of snowdrops 50 feet long. 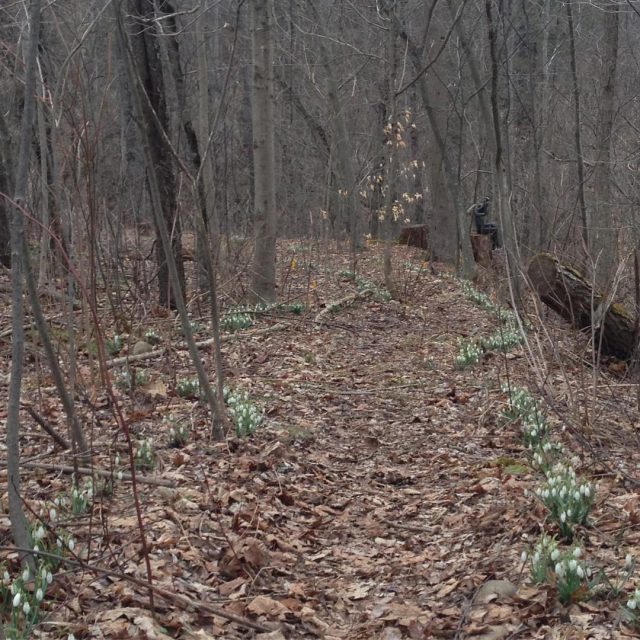 I transplanted some snowdrops from my former home to my new Secret Garden. These were also planted as single bulbs six years ago. Photo ©Talitha Purdy.

I was content with these sweet little things until I found out there were other snowdrops that bloomed earlier. 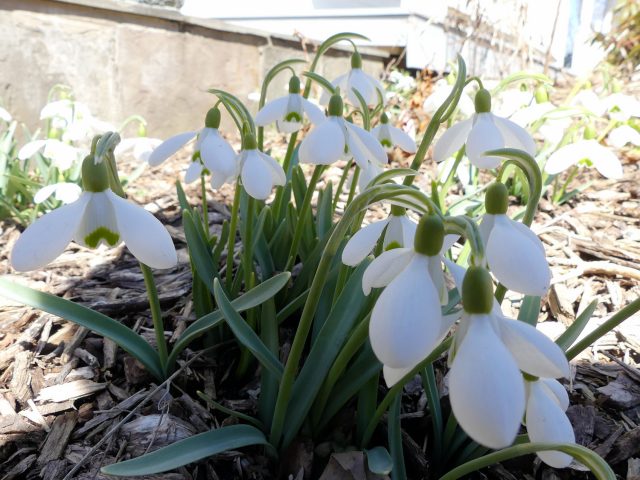 That got me planting ‘S. Arnott,’ a hybrid snowdrop that blooms earlier–and bigger–than the common snowdrop. It’s also fragrant, and while it doesn’t multiply quite as rapidly as its common cousin, it bulks up fairly quickly. I heartily recommend it! 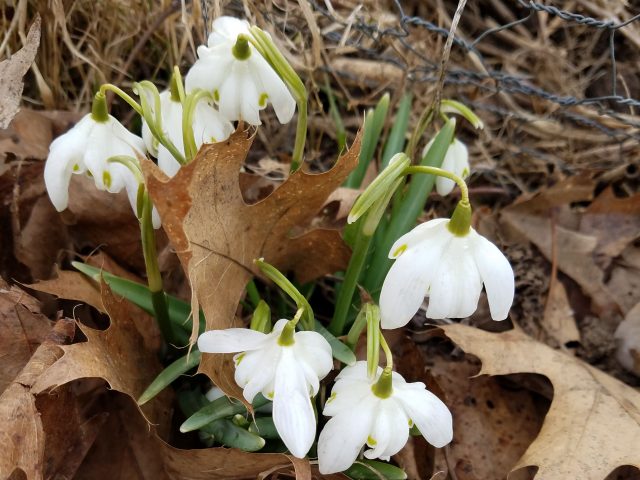 Then a friend gave me the double form of the common snowdrop, Galanthus nivalis ‘Flore Pleno’, whose blooms are perhaps slightly more visible from a distance and certainly more amusing up close.

For many years I was content with those three. But three years ago, I had a gift card for Brent and Becky’s Bulbs in my hand, and decided to order whatever snowdrops they sold that I didn’t already have. 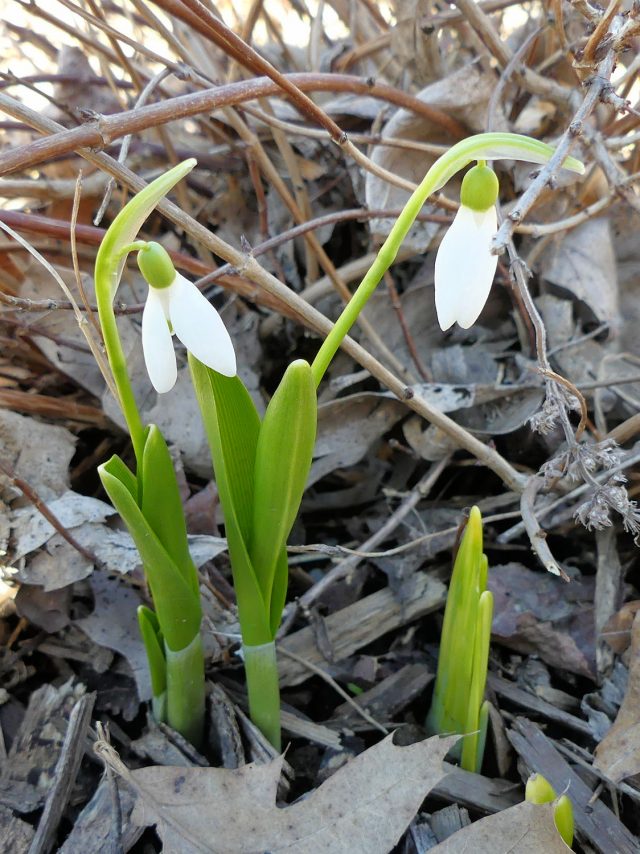 You can tell Galanthus woronowii from other snowdrops because one leaf is tightly clasped around the other. They can tolerate drier soil (and perhaps warmer temps?) than many other snowdrops. 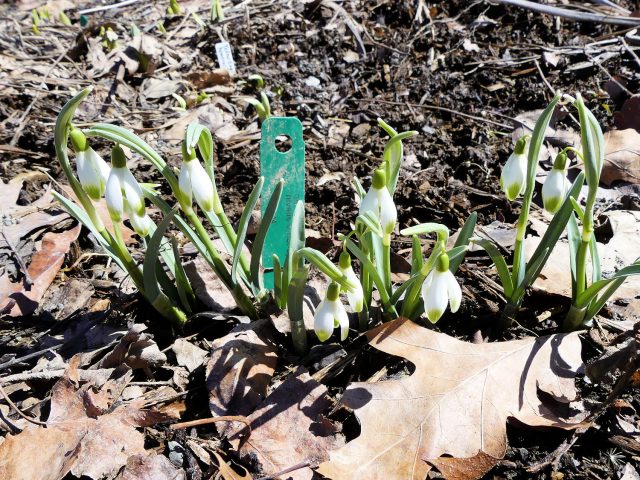 This is Galanthus nivalis ‘Viridi-apice’. Viridi-apice means green peak in Latin, except the peaks are actually the tips of the petals. The green marking is pretty faint on some, but it multiplies just as rapidly as its non-green-tipped cousins. 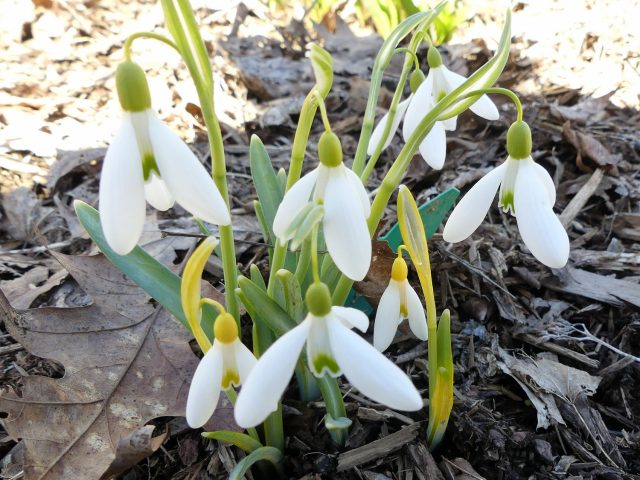 ‘Magnet’ was selected out of a batch of common snowdrops for its especially long pedicel (the part that attaches the flower to the main stem). The outer petals are twice as long as the inner petals, and on a nice warm day (not warm when this picture was taken) the outer petals are almost horizontal. I imagine a magnet on a string for a child’s fishing game when I see this flower. 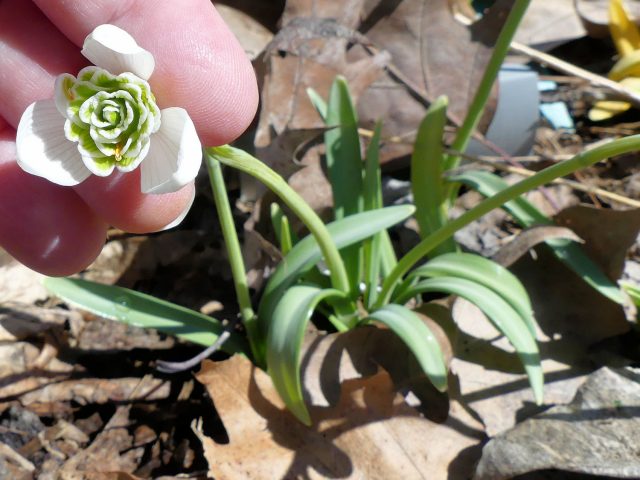 The fair ‘Hippolyta’ is a double whose inner petals are more neatly arranged and whose outer petals are wider and perhaps not as long as G. nivalis ‘Flore Pleno’. Elegant, rather than amusing. It is one of the Greatorex doubles, a hybrid of ‘Flore Pleno’ and G. plicatus, named after a Shakespeare character.

Now I always check my usual bulb-shopping haunts for whatever snowdrops they may offer, never spending more on a single galanthus bulb than I would spend on a colchicum corm. (That’s my own personal rule to stave off galanthophilia.) In subsequent years I have added these snowdrops to my garden: 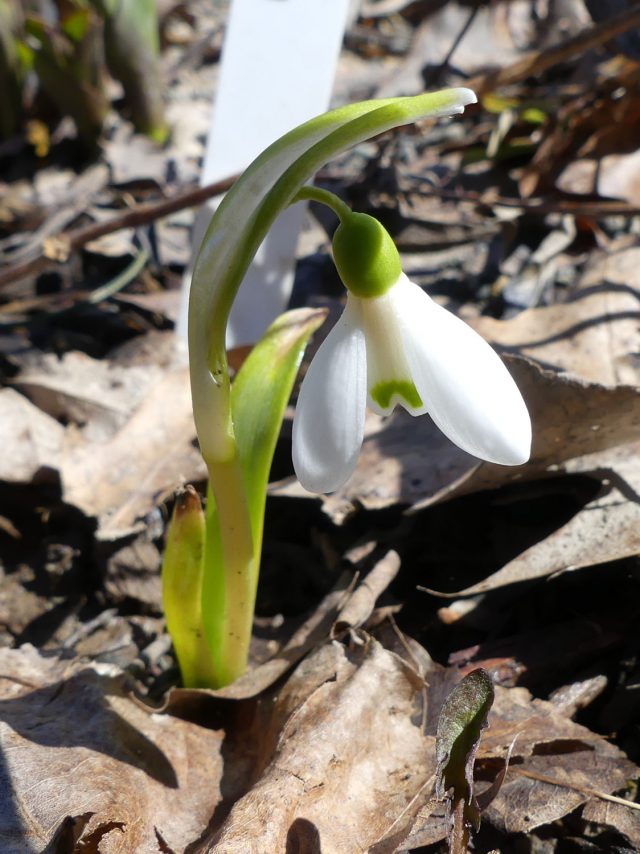 Galanthus plicatus ‘Straffan’ is one of the oldest snowdrop selections still in existence. Baron Clarina, owner of Straffan House, brought back snowdrops when he returned from the Crimean War, and this snowdrop was picked out from those original ones. 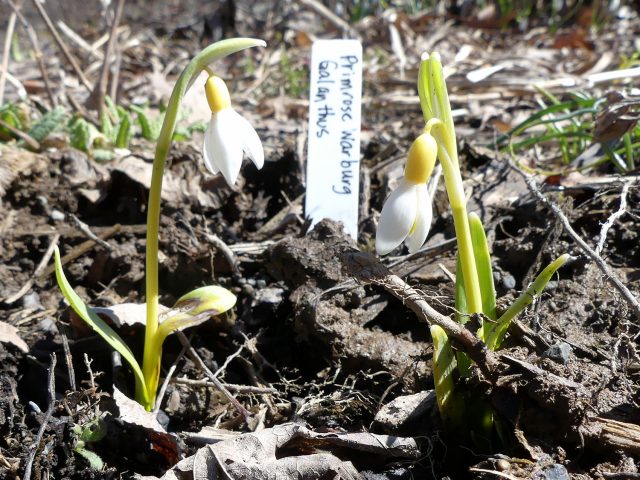 ‘Primrose Warburg’ was the gift of a generous friend, because she still belongs to the “breathtaking price” clique. Her golden ovary and inner markings are what set her apart. This is her first year in my garden, so I don’t know how fast she will multiply, but if my friend had enough to share, I suspect she multiplies freely. 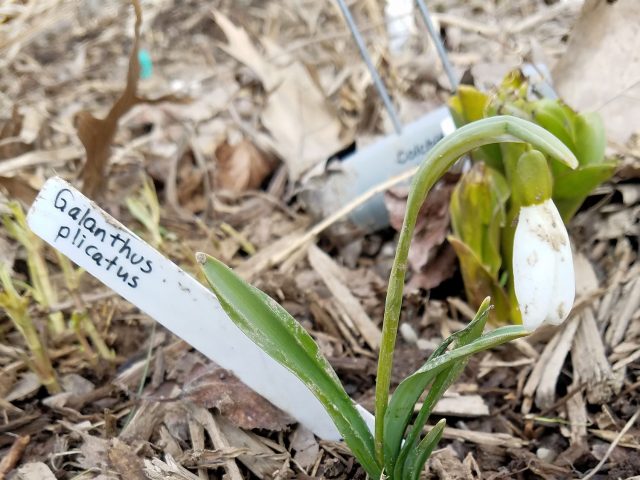 Galanthus plicatus has pleated leaves. This is its first year in my garden, and it had the misfortune of blooming just before we got a big dump of snow, and then alternating snowfalls and thaws. I would like to say it has seen better days, but I think all of its days this year have been pretty miserable. It’s a good picture of the pleat in the leaf, however.

Maybe the differences in those snowdrops don’t seem different enough to you, but I enjoy picking out the details in each variety, especially when Spring moves at a slow pace, as it is doing this year. If you want to learn more about snowdrops, a good place to start is the Snowdrops in American Gardens Facebook group.

Other articles in this series