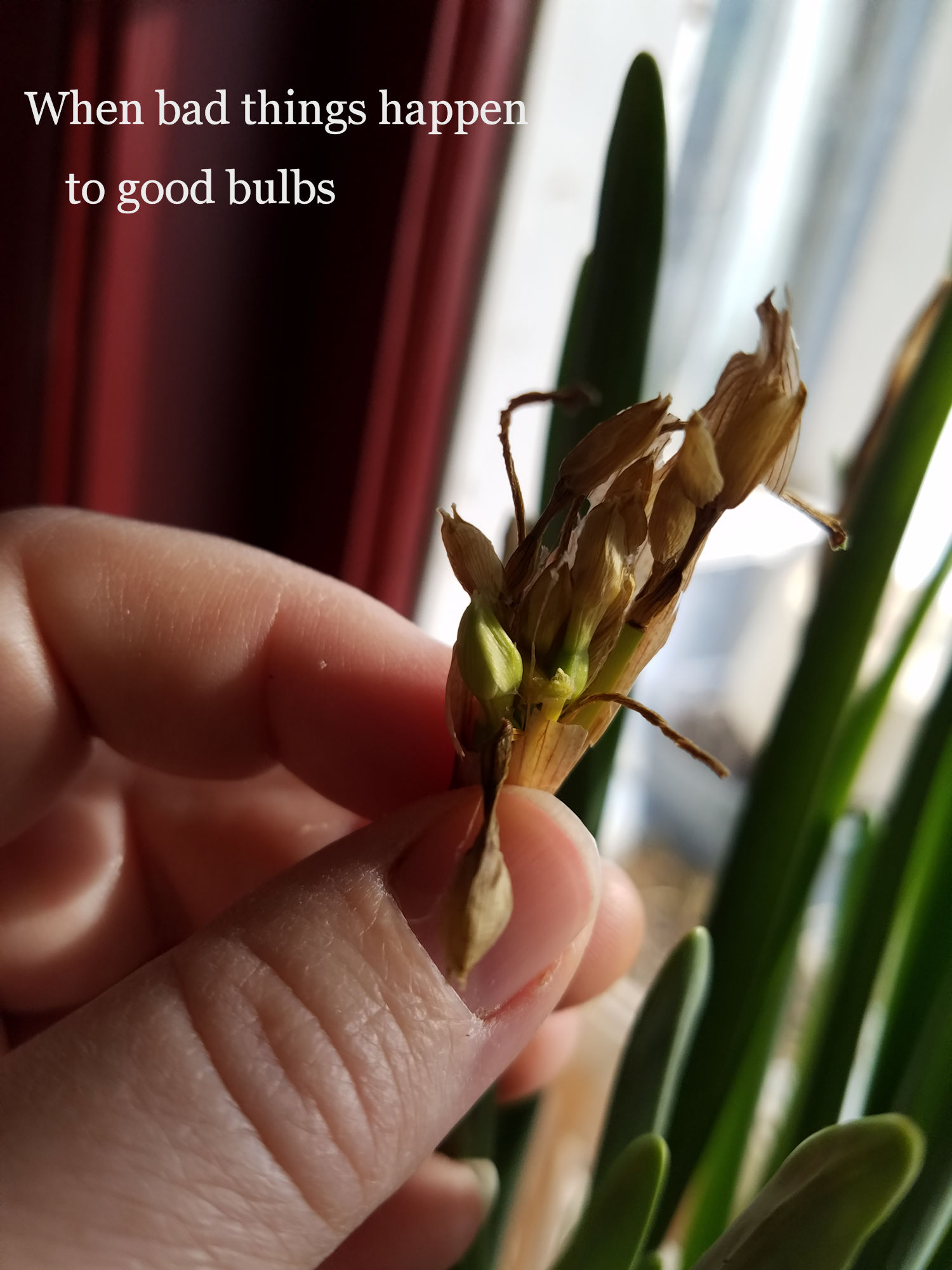 Let’s start with the successes. 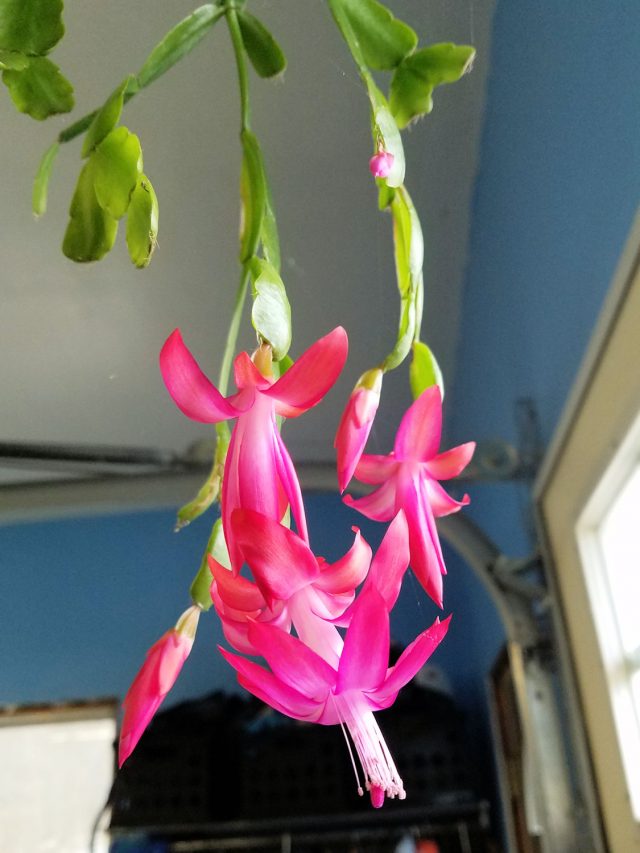 The Christmas cactus is blooming better than it has in years.

I count twelve blooms on it, which is double–maybe triple–what it had last year. I attribute that to following my readers’ advice and summering it outside for the past two years. And I’m pretty sure it’s a bona fide Christmas cactus, because there are no points on its leaves. 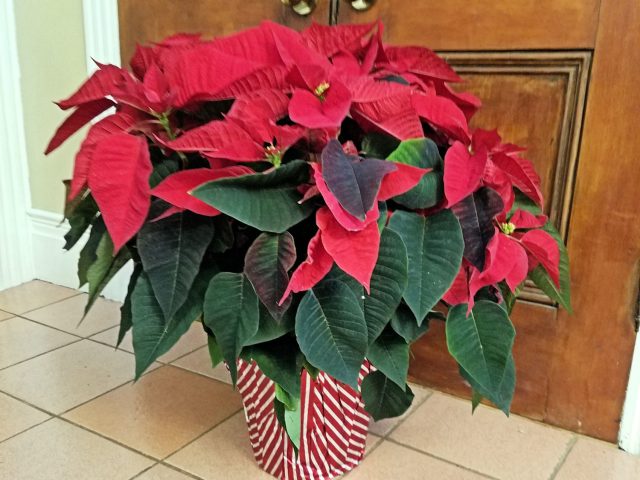 The poinsettia my friend gave me is thriving.

It’s not as easy to keep a poinsettia happy as you might think. They don’t like drafts. But they also don’t like it if you keep the wrapper on too long, because they start poisoning themselves with the ethylene gas they give off. They like their soil moist–but not too moist, because then they get root rot. So, yay me for keeping the poinsettia happy. 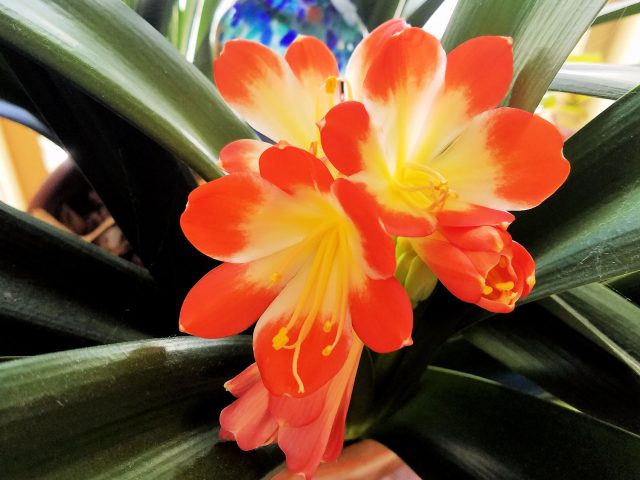 My clivia is blooming!

I think it’s early for a clivia to bloom. I keep it in a cool room that I rarely go into, so it also doesn’t get watered very frequently. In fact, it’s got one of those glass globes with a long stem, which I filled with water, and the water level hasn’t dropped in weeks. I’m not sure whether that means the clivia doesn’t need water at the moment, or the glass globe thingy doesn’t work. But it worked for my mom before she gave the plant to me. And the clivia is blooming. 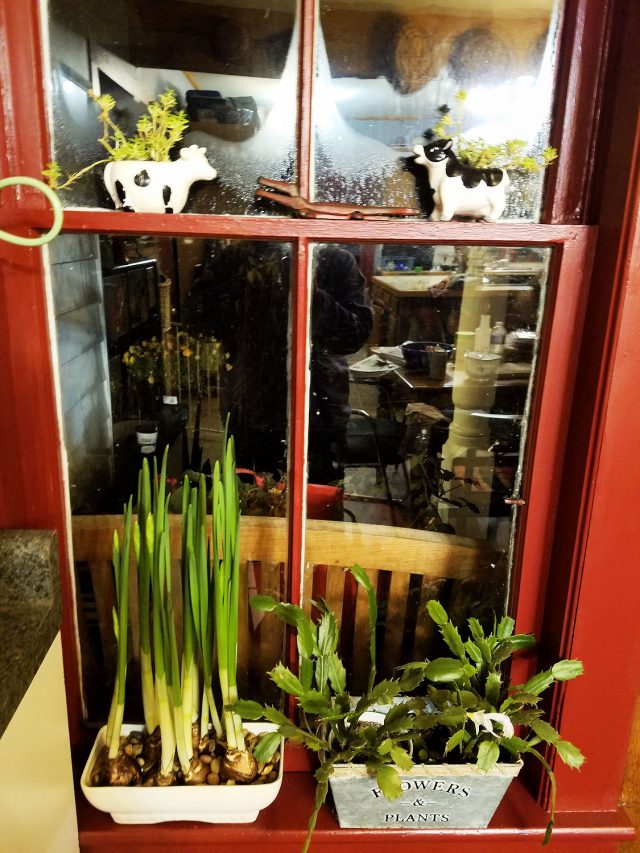 My ‘Wintersun’ paperwhites got off to a great start. 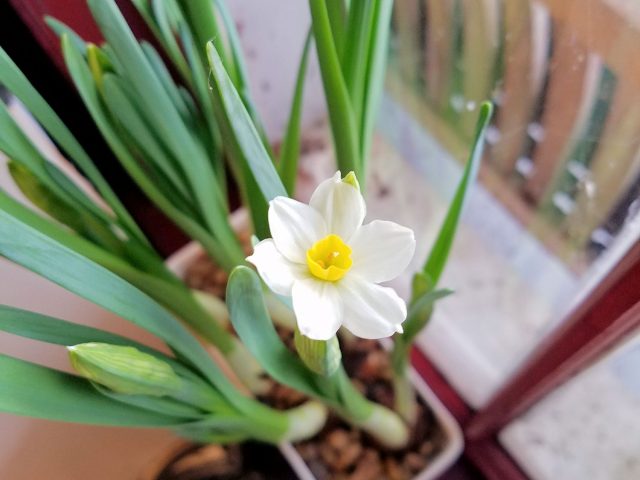 The first flower was pretty and softly fragrant. I could see swollen buds with the promise of many blooms to come. 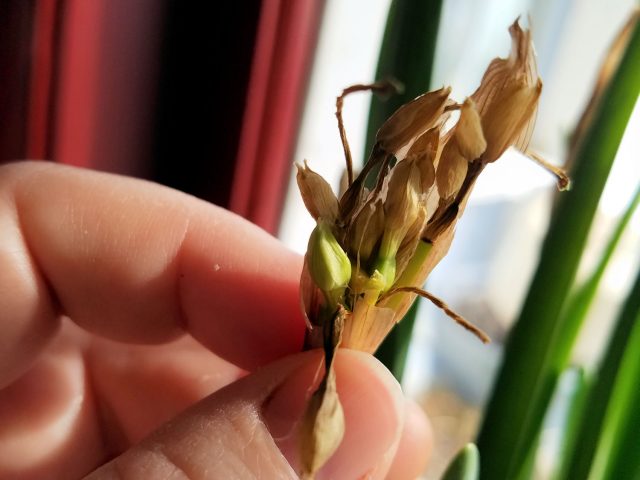 But instead of blooming, the buds blasted.

Bud blast is just what it looks like–the buds dry up and turn brown and papery. This happened the last time I tried to grow tazetta paperwhites indoors. And I didn’t realize this when I bought them, but the last time I bought paperwhites, it was also ‘Wintersun’.

So what went wrong?

Could it be the variety? If I had realized I had grown ‘Wintersun’ before, I would have chosen a different variety.

I used the alcohol and water method to help reduce their height, which I hadn’t done last time. But lots of other people do that, and their buds don’t blast.

Brent and Becky’s Bulbs say that if the paperwhites are too warm, the buds will blast. My kitchen does get warm, but the bulbs were sitting right up against a single pane, old-fashioned window, so I thought they would be cooler than the rest of the room.

I skipped forcing paperwhites for two years because I was so discouraged about this bud-blasting. But I missed growing them, and bought two dozen for this winter. The plan was to start some in time for Thanksgiving–they blasted.

I planted my second batch of bulbs–hopefully to bloom around Christmas–individually in these humorous mugs.

This batch is sitting on my desk, which is pushed up against a door we don’t use that also has a single, uninsulated pane of glass. And my desk is even further from the woodstove than the kitchen, so it’s cooler to begin with. In general, these bulbs are growing more slowly than the previous batch, but one shot up faster than the others (yes, that guy in the middle), had one pretty flower, and then it, too, blasted.

Maybe I’m no good at estimating how much water these bulbs in non-draining containers need. Perhaps I’m putting in too much water or not enough–or alternating between both those things.

I still have some bulbs left, and I’m going to pot these up in potting soil, in a container that drains. The only problem being this container is round, and thus more difficult to place where it will get enough light. I will have to figure out a good location. You can be sure I will let you know if I succeed and these paperwhites bloom. And you’ll probably hear about it if I get bud blast again, because I like sympathy.

Wishing all my readers a joyous holiday season.