Back in 2012, the year I bought my New Deal rowhouse in Greenbelt, I had no idea what to do with this space between the porch and the neighbor’s privacy screen. So I asked YOU, GardenRant readers, for your ideas in this post, and reported on the results here.

I got amazing advice from a stranger to me – a Kate Kruesi in Vermont, who even incorporated her knowledge of my former garden in the process. Among her suggestions:

FEATURE the fence. It has great texture. Don’t hide it behind (unhappy) hollies.
FEATURE the “floor”, too, to enhance the “floor to ceiling” view off your porch (and terrace). Consider a symmetric or Escher-esque (i.e. starts symmetric then “loses” its pattern) checkerboard of bluestone 1′ squares starting off your new bluestone terrace into the space. You played with lawn alternatives at your former home. Play here, too. Really low moss-like Sedums work well in mine. Any ground cover that matches the conditions should be considered. I got this idea from a Kyoto teahouse garden, done in moss.

Ready for the reveal?

Eight years later, I’ve (finally) incorporated all of her suggestions, and (finally) I love the result! 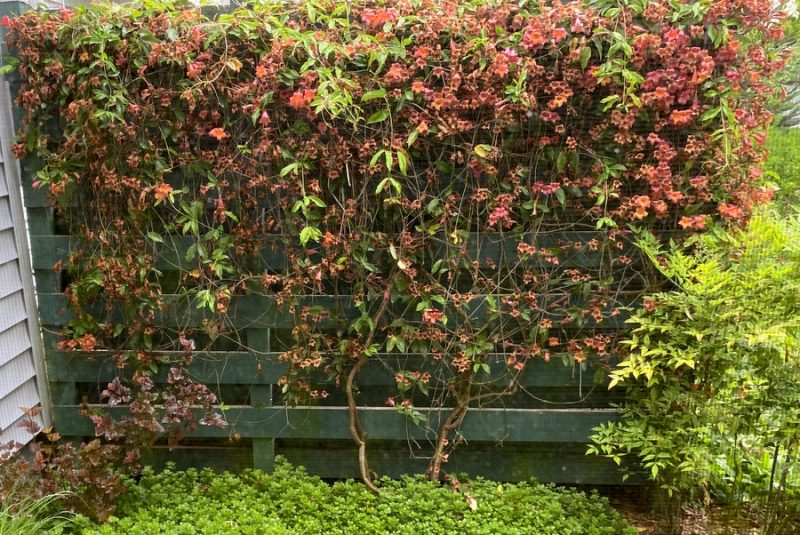 In this view from the porch, the Crossvine (Bignonia capreolata) sure does “feature the fence,” as Kate suggested. 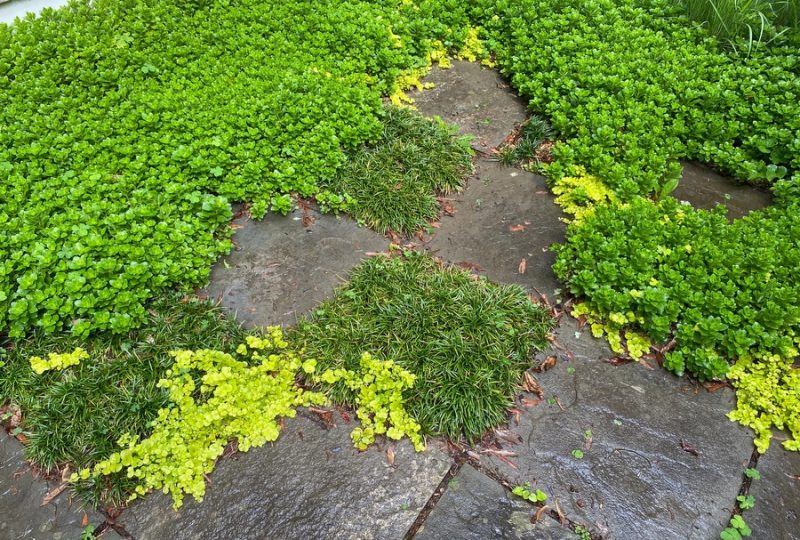 And this mix of groundcovers “features the floor,” too. They’re Creeping Jenny, Mondo Grass and Sedum takesimense, allowed to mix a bit naturally. They’ll stay short enough to keep the view from the porch open – for me and my indoor cats. (Their current obsession is watching for lizards.) 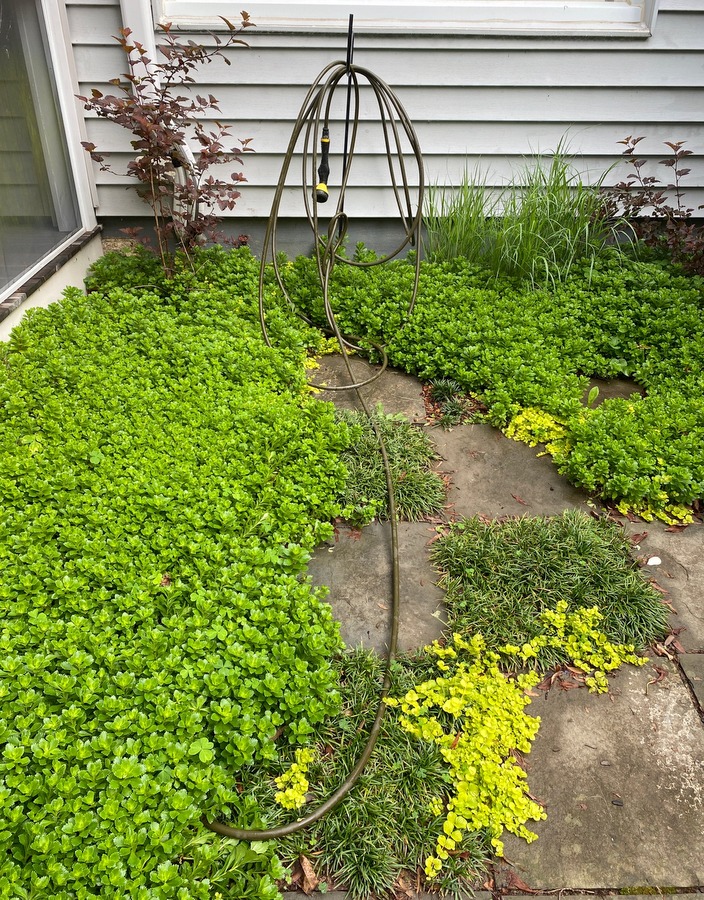 This is how it looks when I’m not taking a picture – with garden hose at the ready.  I wouldn’t do this with a regular garden hose – it would break the Sedums – but here you see the new lightweight kind that’s so easy on plants and people. Still, I tacked the hose down through the Sedums and directed it onto the tougher Mondos in the middle.

Now before you suggest further changes (okay, I can take it), remember that the plants along the house are new as of last year, so put your future-eyes on. The two Ninebarks will be 2-3 times larger before long, and so will these grasses, the name of which I can’t provide due to faulty recordkeeping. (They’re native and have either “red” or “purple” in the name. Anyone know?)

I got help choosing and arranging these Ninebarks and grasses from garden designer Carolyn Mullet, who visited me in the garden last year. She has a great eye.

On a final note, it was humbling to look back at my back garden in its first year and discover that NONE of the plants I put there are still there. Yes, despite decades of gardening, it turns out I had lots to learn about designing this tiny townhouse garden.

Nook Garden Update, and Thanks again to Commenter Kate Kruesi originally appeared on GardenRant on June 4, 2020.

The post Nook Garden Update, and Thanks again to Commenter Kate Kruesi appeared first on GardenRant.