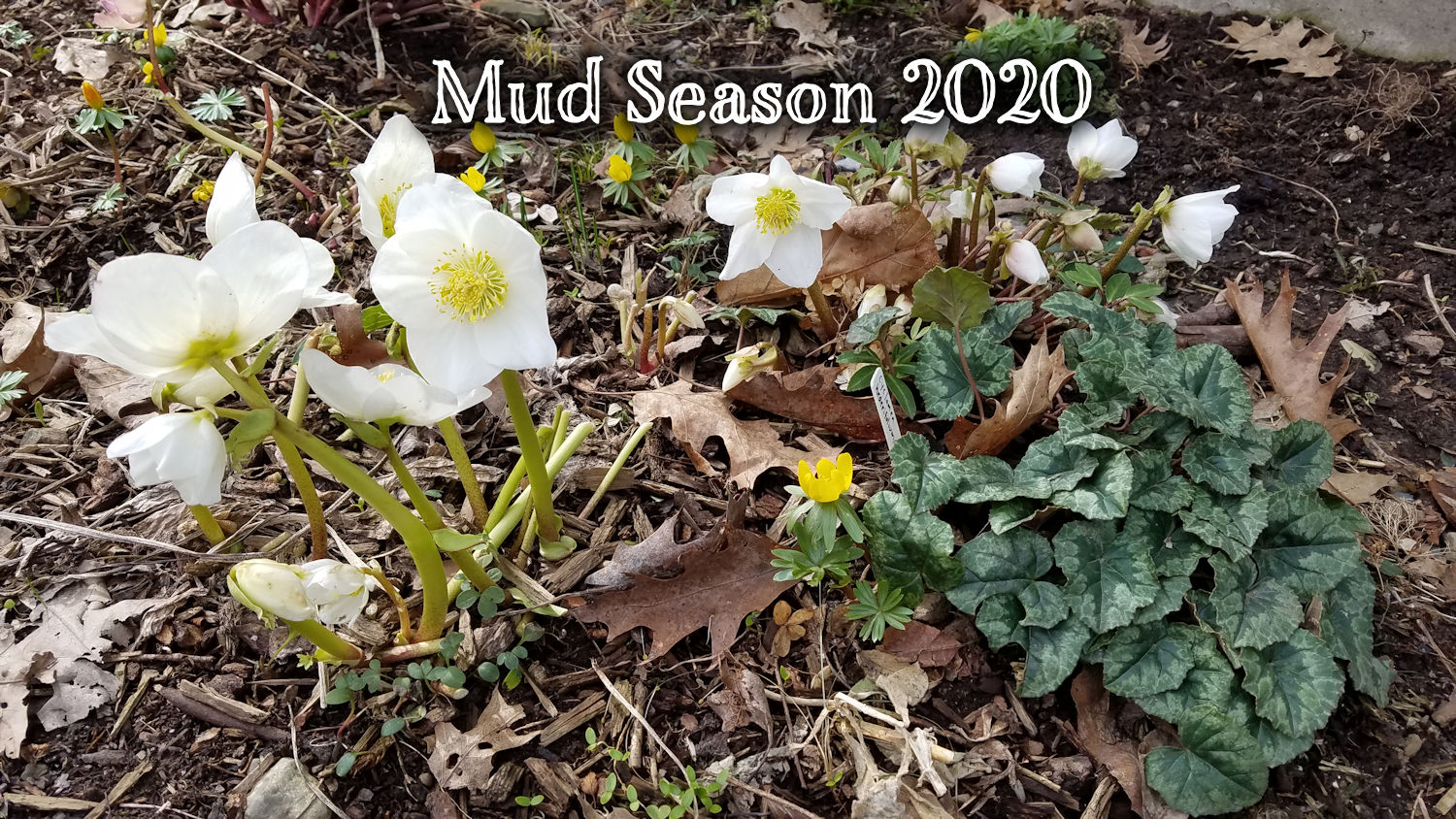 How was your winter? My winter was pretty mild, and mud season started in February, with alternating snows and thaws. I was fortunate to miss a heavy snowfall that buried gardeners north of here, so mud season is here in earnest now, and I’m enjoying the rewards of planting the earliest blooms where the snow melts first. As of yesterday, all the snow has melted. As of today, it’s snowing but not sticking to paved surfaces–except it switches to rain every so often. That’s mud season for you.

Since it’s been warmer than usual overall–but not too warm–the flowers have been opening slowly and lasting a long time. Many of them would typically be featured in an April blog post. The days with sunny, warm weather spoil me. When we get a cloudy, snowy, blustery day I have to remind myself that this is only March, and it could be worse–like three-feet of snow worse.

Because our winters are so long, the very beginnings of spring take on a greater importance, and every blooming plant is a treasure. Take a look at what’s growing in my garden–and what I’d like to add–and make next year’s mud season a little more floriferous in your garden.

The earliest of the early

My very first blooms were winter aconites snuggled up against the house and visible from my cabin fever window. (I show the location in this post.) It bloomed February 23rd. Yes, February!

Later on, this semi-double form shows up, as well as many more clumps of the common ones as the snow continues to melt. More about winter aconites here.

Very early, very showy (large flowers plus tall for a snowdrop), multiplying quickly, and fragrant–‘S. Arnott’ snowdrops are a great investment and perfect for beginners.

Every so often I dig a bunch up, divide and replant. I planted them singly around the wellhead three years ago, and look at them now! Want to know more about snowdrops? Read this post.

Cyclamen coum flowers are tiny but intensely colored. They usually bloom soon after the snowdrops and aconites. I used to think these weren’t hardy here, but some sources say they are hardy to USDA Zone 4, so I gave them a try a couple of years ago, and they are doing fine.

I always hesitate to show this flower, because it’s almost impossible to find unless you know someone who’s growing it and is willing to share. Because it dies if it dries out, commercial nurseries can’t or won’t ship it. I bought some from Daffodils and More one of the few times they offered it and I checked–they don’t plan to offer it again.

The spring snowflake blooms right after the three described above and before the main crocus show. Don’t confuse it with the “summer” snowflake (Leucojum aestivum) which blooms with the daffodils and thus is a spring-bloomer by most gardeners’ reckoning. It tolerates being dry while dormant and so is easily shipped and widely available.

The earliest blooming crocuses for me are cultivars of Crocus korolkowii. ‘Early Gold’ is next. I plant them in spots along the front walk where the snow melts first. I get them from Odyssey Bulbs.

Crocus tommasianus cultivars bloom next. These are the ones known as “tommies” and are reputed to be the most rodent-resistant. They are widely available, sometimes as a mix and sometimes in separate colors. Some say they self-sow, but I’m not sure they are doing that in my lawn.

Read about the crocus lawn here and here. I’m not sure why these crocuses don’t seem as showy as the Crocus Bank at the old house. It may be they are getting mowed too soon, and thus don’t have enough photosynthesis to create next year’s flowers. I don’t think they are getting eaten (much) because I do see leaves come up in spots where there are no flowers. Perhaps they aren’t dry enough in summer. Click here for more info about crocuses.

Yes, Virginia, there are colchicums that bloom in the spring (and crocuses that bloom in the fall). Most of them seem a bit touchy about drainage, meaning I grew them once before and lost them, and I’m trying again. Three years ago, Colchicum munzurense bloomed on February 20th before any snowdrop or aconite. But it never bloomed again. I’m trying it again this year, but I planted it in a trough which I kept in a (dark) unheated garage. I didn’t bring the trough out until March. Maybe it would have bloomed in February if I brought the trough out sooner. Or maybe the alternate freezing and thawing would have done it in. This is only Year One of an ongoing experiment.

Colchicum hungaricum ‘Valentine’ bloomed in February for the guy who named it. I think it also bloomed pinker for him than it does for me. However, the last time I grew this plant, it bloomed in April. It grew in the Cabin Fever bed back then, and now it’s planted along the front walk, not far from the ‘Early Gold’ crocus. I do think mud season is early this year.

Colchicum laetum is planted in the same trough as C. munzurense: I wanted to give it better drainage, and I’m not sure how hardy it is. Actually, I’m not even certain that it’s C. laetum, because it’s supposed to be fall-blooming. But that’s the only name I have, and it’s blooming now.

Bulbocodium vernum is also called Colchicum bulbocodium. As best as I can tell, the experts haven’t yet made up their mind. If it is a colchicum, it’s the easiest of the spring-blooming colchicums to grow. It actually multiplied enough that I dug it up and planted offsets in a new location. It’s also a little easier to find–you can get it from Brent and Becky’s Bulbs, for example.

Fun fact: Sometimes hellebores are sold as pot plants in a grocery store, and they often cost less than they would in a nursery. I bought ‘Jacob’ from my local Wegmans around Christmas one year, but I couldn’t keep it alive until the ground thawed in mud season. Four years ago I bought ‘Pink Frost’ around Easter and it didn’t have to spend so much time in the house and–well, here it is. Cool temperatures bring out the red coloring, I think.

Helleborus niger goes by the common name of Christmas rose, and in warmer climates these hellebores bloom in the fall–even as early as October–and bloom throughout the winter. ‘Thanksgiving Bloom’ was so named by Ellen Hornig because it reliably bloomed in November for her. It’s a rare year that I actually get to see an open flower before they get covered in snow. But never fear–these tough plants just patiently wait until the snow melts and bloom during mud season. For pictures of my other Cabin Fever Bed hellebores, check out this post and this one.

Early-blooming bulbs respond to increasing soil temperature. Early-blooming shrubs and trees respond to warming air temperature. If we get a mild spell in February they can be blooming before the snow is off the ground. That’s why I’ve started experimenting with spring-blooming witch hazels. The Ozark witch hazel is a smallish native tree hardy to USDA Zone 4. It has bloomed each February since I got it two years ago. However, even though it’s the largest of all my witch hazels (bought in a 3 gallon pot) it’s still not what I’d call showy.

Maybe as it gets bigger it will be more showy. I’ve read that it’s best to place a witch hazel so that it has a solid background behind it, such as the wall of a building, a big evergreen conifer, or even backed by a snowy hill. Mine is planted at the edge of the woodsy Secret Garden, viewed from the lawn. That also means it’s only getting sun from one side. Sunlight is what powers flower development, so perhaps it will never be that showy. It still provides a reason to get out of the house during February and March!

‘Birgit’ is the one witch hazel where I followed the design advice to plant it in front of a solid background–in this case, our detached garage. It was quite a bit smaller than the Ozark witch hazel when I planted it two years earlier, and it’s still not as big. ‘Birgit’ is a hybrid of H. japonica and H. mollis, which is written H. x intermedia. This class of hybrids is generally considered hardy to USDA Zone 5. I still can’t believe my garden is a zone warmer than it used to be, so planting these hybrids feels like gambling to me. And it’s certainly gambling when it comes to rabbits–I’ve lost two different ones to them.

Every year that I go to the Ithaca Garden Fair, I stop by Coldwater Pond Nursery’s display and see what they have in the way of witch hazels. They offer one-year grafts of many woody plants, and it’s a relatively inexpensive way to experiment. Last year I picked up ‘Angelly’, reputed to be one of the yellowest-flowering cultivars. And that is all the blooming I got from this baby tree–enough to get the idea.

February daphne is a wonderful shrub for mud season, hardy to USDA Zone 4 and fragrant. I don’t understand why more nurseries don’t offer it. I suspect it doesn’t root from cuttings, and growing from seed isn’t profitable. Consequently this is another perfect plant for cold climates that you need to “know someone” in order to acquire it. A gardening friend gave me seedlings from her well-established shrub. So far I haven’t seen any seedlings from mine. My “February” daphne usually blooms in April, so I’m quite pleased to have it bloom a couple weeks early.

I need these plants!

I am always on the hunt for more, better, and different plants for the very earliest blooms in mud season. My gardening season is too short to waste a minute of it!

Somehow I thought adonis was only hardy to USDA Zone 6. Just recently I saw it on Steve Whitesell’s Instagram feed and my jaw dropped. He gardens in the Catskills, in a climate equally as cold as mine, and told me he’s had his for ten years and it’s hardy to USDA Zone 4. This is another plant uncommon in the trade. According to Louis Raymond, the seed isn’t viable for long, seedlings don’t like to be moved, and divisions are best made after the plant goes dormant. Plus, it’s slow growing. Nevertheless, I’ll be keeping my eye out for this beauty.

I have grown ‘Lady Beatrix Stanley’ before, but they all died on me. Further research indicates they like a free-draining soil and need dry heat in summer to set flowers. At least one bulb catalog calls them rock garden plants, so I think I will try them again in the herb garden. Maybe I will have to consider them annuals and replant every year. I really don’t want to be without that blue!

I hope you saw something you want to add to your own garden. Most of the bulbs are so small, you can tuck them in anywhere. It’s a good time to take a look around to see if there’s room for a witch hazel or a daphne. And, who knows? Maybe your grocery store is selling hellebores!