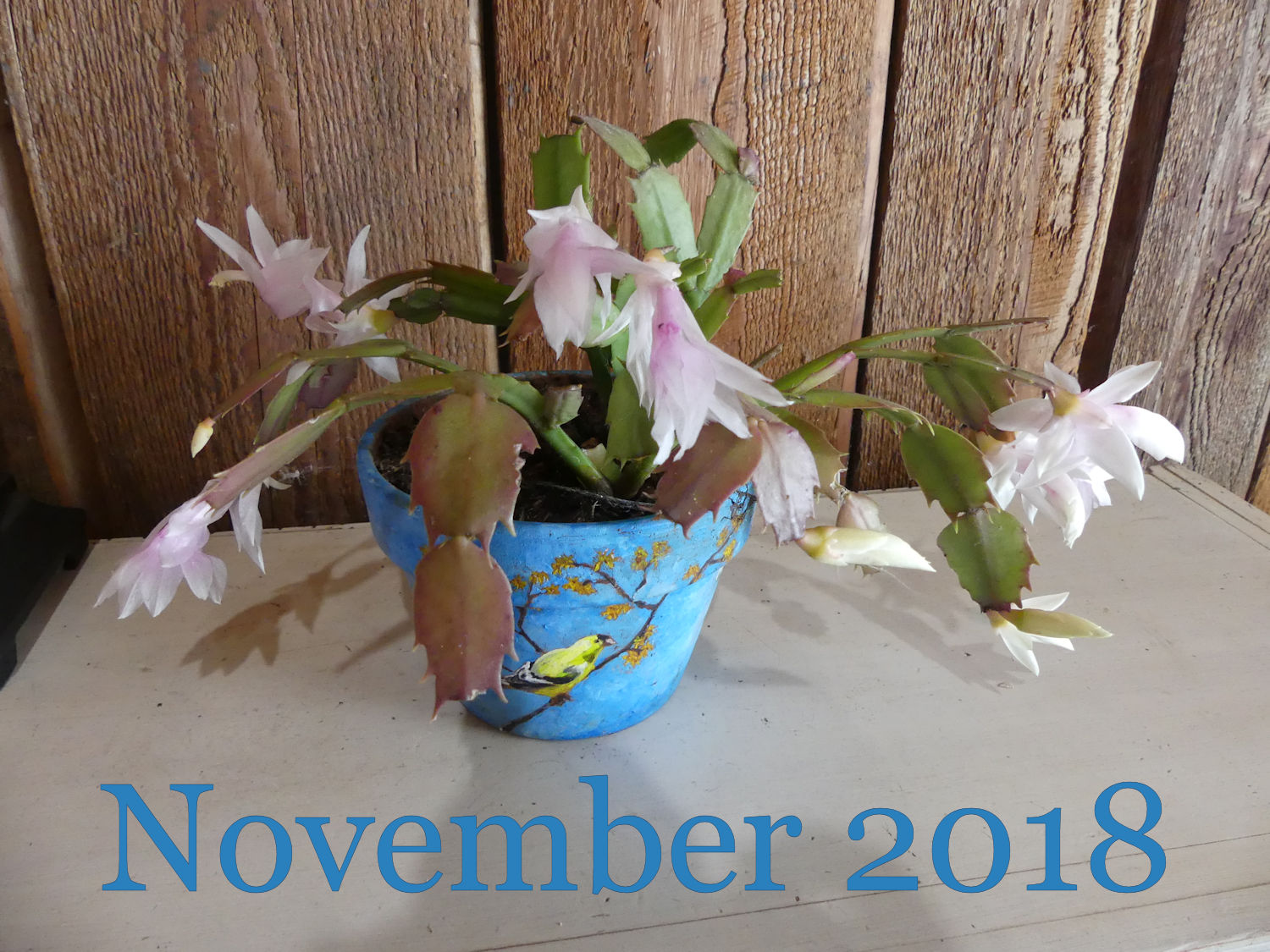 I‘ve been growing houseplants since high school, but I never stop learning new things about them. Take zygocacti (Schlumbergera)–popularly known as Thanksgiving cactus and Christmas cactus. The standard advice is to put them in a dark place for 12-14 hours a night in order to get them to bloom. In high school I avoided growing Christmas cactus because I knew I would never remember to do that night after night.

My mother-in-law didn’t follow that advice. She put hers in the basement family room until they set buds, and then brought them upstairs to enjoy the blooms. I don’t think she used that family room very often, so maybe they got the darkness they needed that way as well. Who knows?

But it inspired me to give them a try, especially since she was kind enough to root a piece for me. In my previous home they started blooming right on schedule after spending time in a (not dark) upstairs bedroom. But in this house bloom had been sporadic–until I followed the advice of my readers. Many of you told me in the comments that you took them outside for the summer and left them outside until they were in danger of getting frosted. (Which is not necessarily at the time of the first frost, because if the first frost is light and they are stationed on the porch or hanging from a tree, the frost may not touch them.)

Now they bloom abundantly, but not at Thanksgiving or Christmas. No, they have buds on them within days of coming inside, and are blooming abundantly right now! 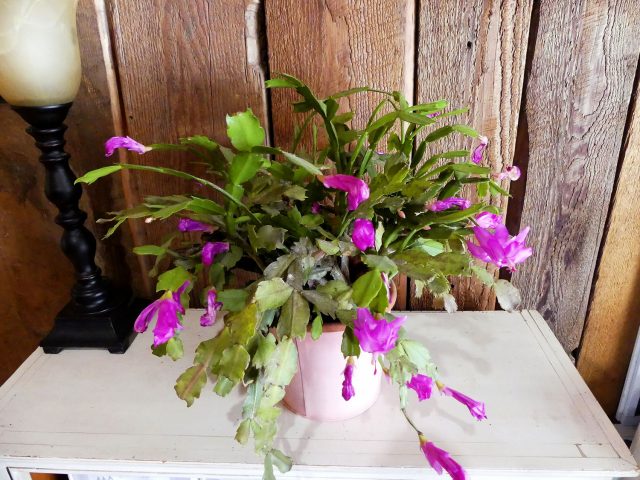 This is my most prolific Thanksgiving cactus, a hand-me-down from my mother.

I’ve recently realized that even though my mother bought it blooming sometime in December, the leaves indicate that it’s actually a Thanksgiving cactus. The Laidback Gardener illustrates the differences clearly. The Christmas cactus that came from my mother-in-law (not pictured), which I’ve had for far longer, is just setting buds and may bloom for Thanksgiving. I think it’s a true Christmas cactus, indicated by its leaves. 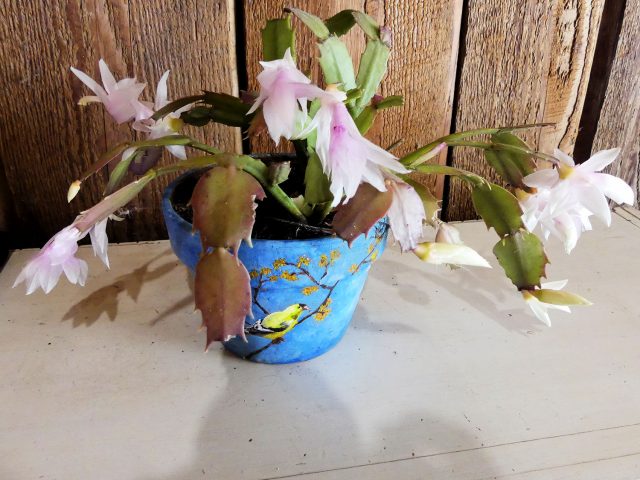 This is another “Thanksgiving” cactus, blooming well before Thanksgiving, but not as soon as the one from my mom.

One of my friends told me that she doesn’t concern herself with light or temperature. To get her zygocactus to bloom, she withholds water for about a month, and then starts watering again. Matt Mattus of Growing With Plants says withholding water to induce bloom is a myth. But it works for my friend! Providing a sharp change in temperature by leaving the plants outside in early fall worked for me.

Lesson learned: There are a lot of variables involved in getting these plants to bloom. And it also varies from plant to plant. If one method doesn’t work for you, try a different method–or try a combination of methods. 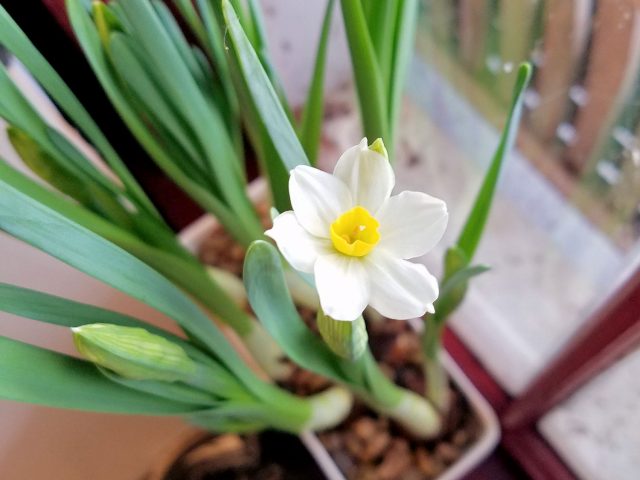 This is a paperwhite narcissus called ‘Wintersun’.

The first time I grew paperwhite narcissus, my husband complained about the awful stink. Then I read in an old issue of the Old House Gardens newsletter: “The general rule is the more yellow in the flower (cups or petals) the better the scent (inherited from Narcissus tazetta orientalis) and the more white, the more ‘manure’ the scent (inherited from N. papyraceous).” Lesson learned:

Not all paperwhites are stinky! This year I’m growing ‘Wintersun’ which I purchased from Colorblends. The fragrance is delightful when the flowers first open, but as they age, the fragrance changes subtly and is not as pleasant. But I can’t smell them at all unless I bring my nose close. And I love the way they look!

p class=”note”>Inspired by the words of Elizabeth Lawrence, “We can have flowers nearly every month of the year,” Carol of May Dreams Gardens started Garden Bloggers Bloom Day. On the 15th of every month, garden bloggers from all over the world publish what is currently blooming in their gardens. Check it out at May Dreams Gardens.