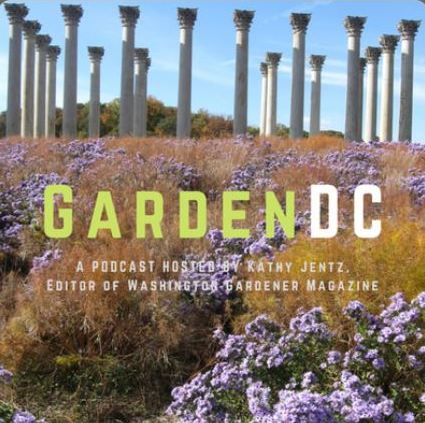 As a long-time podcast listener I just assumed that listenership would be on the rise during the pandemic, but apparently just the opposite – though they’re now coming back.

I wonder if the downturn included podcasts about gardening, though, which is growing in popularity. Newbies gotta learn, and learn digitally.

One gardening podcaster who’s recently gotten my attention is my local friend Kathy Jentz, who launched her podcast GardenDC in March of this year. She’s the editor of Washington Gardener Magazine, so she covers whatever grows here in the Mid-Atlantic. The focus is hyperlocal.

So naturally I subscribed and was happy to discover that Kathy employs my favorite podcast format – interviews. Not co-hosts chatting it up, my least favorite format.

And the first episode – an interview with Barbara Bullock, long-time and now retired curator of the azalea collection at the National Arboretum – was SO good, so impressive, it’s worth a post all its own but for now, here’s my interview with Kathy about how the “pod” came about, and more.

A couple of years ago Kathy began “surveying” as many gardening podcasts as possible, which she found irritatingly difficult to do since the pod apps (especially Spotify and iTunes) don’t provide a category for gardening like they do for other topics. She had to search the key words.

That leads to Kathy’s first tip for new podcasters – put “garden” right there in the title and the description, so people can find you. “Keep it simple and searchable.”

(To make all gardening pods easier to find, Kathy said she’ll be suggesting to GardenComm that they create a gardening podcast directory, maybe free for members and at a yearly fee for nonmembers. Great idea!)

In her research Kathy found a podcast recording studio in DC that would have made podcasting easy-peasy, but their fees were out of sight.

Then she came upon the newest, hottest podcasting application – Anchor – and decided to take the plunge. It’s completely free, and distributes podcasts for you to the important places, including iTunes and Spotify especially. (Anchor is now owned by Spotify.) It provides editing software, curated music (30 interlude clips) and even promotes your podcast for you. Again, all free, no premium version to upgrade to!

Anchor earns money – or will eventually – by taking a percentage of their podcasters’ income from sponsors and listener supporters.

And sure enough, when we talked recently Kathy said she already had four actual listener supporters, each of whom pays .99, 4.99 or 9.99/mo. to support GardenDC. “It’s good to know people DO give to podcasters!” She figures that just 10 listeners at $5/month would compensate her for her time at least at minimum wage! Well, that’s a start.

So how much time DOES it take to create an episode? For GardenDC, Kathy records a 1-hour interview, all in one take, then spends another hour and a half to get the episode up, for a total of just 2.5 hours. “Editing is the worst!” Thankfully, she has 3 interns from the University of Maryland School of Journalism starting June 1, one of whom wants to edit. (Couldn’t we all use an intern or two?

In her search for interviewees Kathy can choose from the hoards of experts here in DC or not too far away in places like Philadelphia. Well, except maybe for government employees, who are difficult to book because their appearances require all sorts of approvals. At all levels of government.

Happy to report that with Anchor, technical requirements are minimal. “All you need is Anchor and an iphone.” She has a separate headset but no longer uses it. She also avoids professional cameras – “they’re a pain.” Podcasts recorded outside, however, would definitely need a professional microphone.

Kathy says she’s enjoying being the interviewer, not the expert, just “playing dumb and asking questions.” And she prefers a conversational tone, not a didactic one.

Kathy being the ultimate networker, she of course discovered a collective of like-minded people – the Garden Podcaster Collective, many of whom are in the U.K.

There she read about a controversy in the podcasting world – whether transcripts should be provided. That’s fine for top podcasters but the ones with small audiences and income just can’t afford transcripts. “Transcribers are the ones making all the money,” Kathy told me. She cited one who charges $100/hour for transcripts, and it typically takes three hours to do one for a 1-hour episode.

That brings back memories of my first career as a “court reporter” providing transcripts for Congress, government meetings, and courts. With none of those events happening these days, I hope my former co-workers are finding gigs in the digital economy – maybe creating transcripts for podcasts. Hopefully, even for all those events on Zoom.

Kathy Jentz and the GardenDC Podcast originally appeared on GardenRant on May 28, 2020.

The post Kathy Jentz and the GardenDC Podcast appeared first on GardenRant.