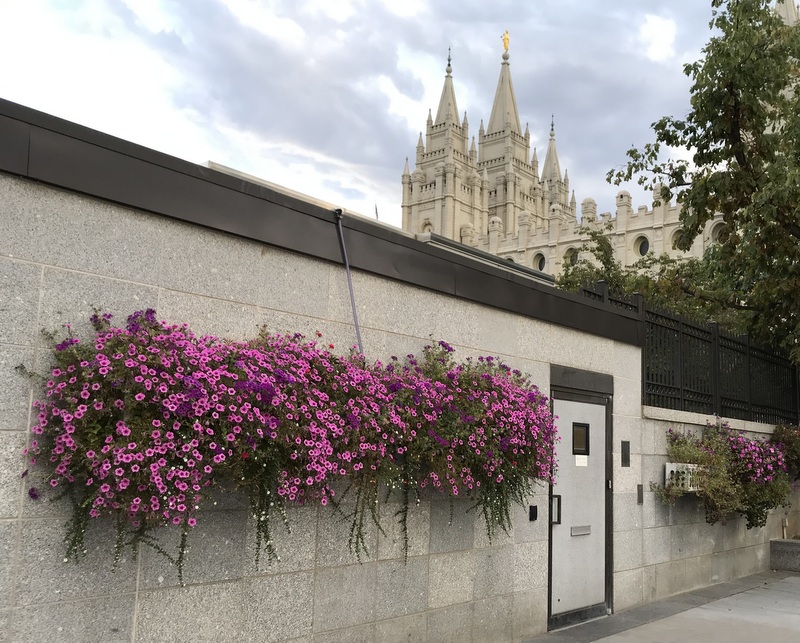 last month I heard from multiple sources that the Mormon Temple Gardens were shockingly bad! So I left the busy cocktail reception and set off on a mission to behold the horticultural abomination that had been described to me.

What I found were 35 whole acres of turfgrass and annuals in beds surrounding the Temple, there in the desert! Utah is the second driest state in the country! Wiki writes:

The gardens at Temple Square include 250 flower beds, over 165,000 bedding plants, and over 700 varieties of plants from all over the world. The gardens are redesigned every six months and replanted mostly by volunteers and seven full-time supervising gardeners.

It gets worse. The (my bad!) LDS Church is far from alone there in Utah in landscaping like it’s Connecticut. Turfgrass and and other thirsty plants are actually the NORM there – still – and that’s thanks to their water supply being so close and so cheap.

It’s so bad, “some 70 percent of the water in Utah’s cities is used primarily to irrigate grass.” (Source.)

Change is coming to the Temple Gardens, at least. A local organizer told me they’ve pledged to make improvements in water usage and send a better message to their members.

But the primary organization charged with turning the public around about thirsty Eastern landscapes is the local water authority, whose conservation efforts focus on teaching people to use “localscapes.” It’s an educational effort led by “outreach coordinator” Cynthia Bee, whose terrific talk for garden writers I got to hear.

How NOT to Change Residential Landscapes
Having studied the poor results of water authorities and others pushing for conservation, Cynthia learned that people are turned off by the term xeriscape, which is commonly interpreted as requiring lawns to be replaced with rocks and cactus. Information about conservation is often seen as inaccessible and intimidating. People don’t relate to the term “gardener,” so Cynthia decided to teach “landscaping for homeowners,” not gardening for gardeners.

And a “light bulb moment” for her was finding that people “equate conservation with sacrifice,” giving up something of value for the good of other people.

Localscaping
In Cynthia’s talks and the courses she teaches, lawn is referred to as a recreation center, not a default ground cover. So if people that if they need some lawn, okay, but if not, she shows them gorgeous xeriscapes that their neighbors might just want to copy.

Here are Cynthia’s “Rules of Lawn:”

(To Easteners like me, teaching people to design lawns that are easier to irrigate may sound like a dubious conservation message. Water shouldn’t be wasted irrigating lawns, right? But without irrigation there ARE no lawns in Utah.) 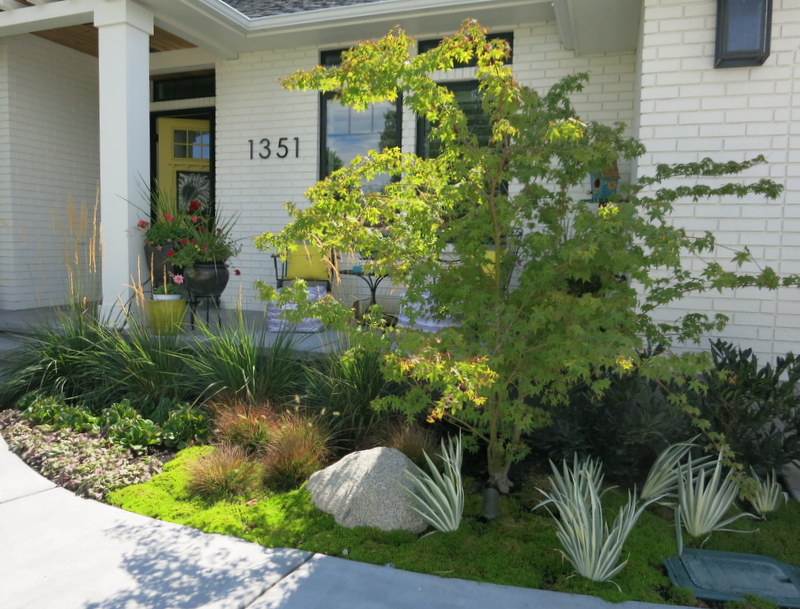 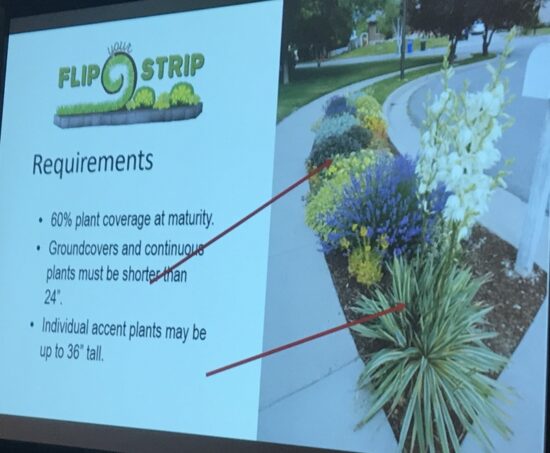 One successful message to homeowners is to “Flip the Strip” by replacing lawn in “hell strips” with localscapes. These small spots are easier to tackle and can be “gateway drugs” for larger changes.

“Save Your Saturday” is another promotional theme that’s working. It shows how much time is saved in mowing and trimming lawns that are designed for efficiency.

In new developments, localscaping was initially offered as an “upgrade,” with larger patios and less lawn, but it was so popular, it’s now it’s standard. It’s driving demand! Contractors get cash back if they localscape. Cynthia provides them with marketing tools touting the beauty and virtues of these landscapes. 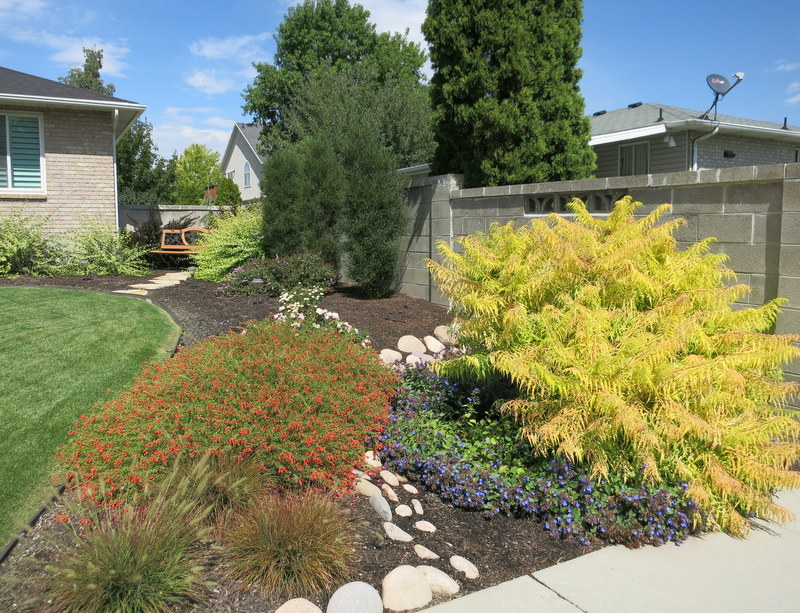 People who’ve created “localscapes” share them on social media, to the Localscapes Facebook group and elsewhere. Instead of posting signs proclaiming their yards to be “localscapes,” they post signs at the start of installation, when neighbors are most interested in what’s going on, stating “This yard’s being Localized.” It’s “Pardon our dust” with a message. 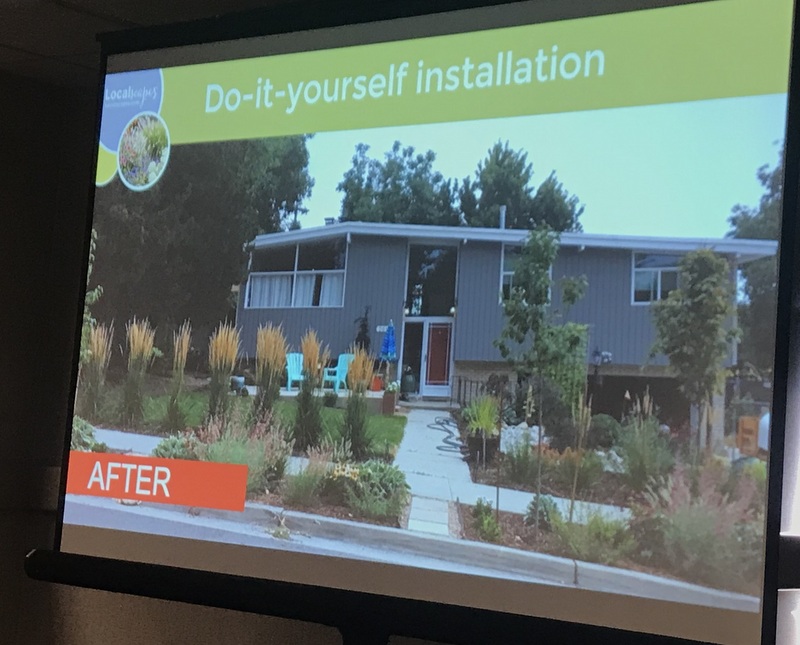 How Writers can Help
From Cynthia’s talk to garden writers:

Scroll down to read Cynthia’s comment about first teaching xeriscaping, then creating the localscape approach that allows for some lawn.

Gardening in the Utah Desert and the Push for “Localscapes” originally appeared on GardenRant on October 4, 2019.

The post Gardening in the Utah Desert and the Push for “Localscapes” appeared first on GardenRant.