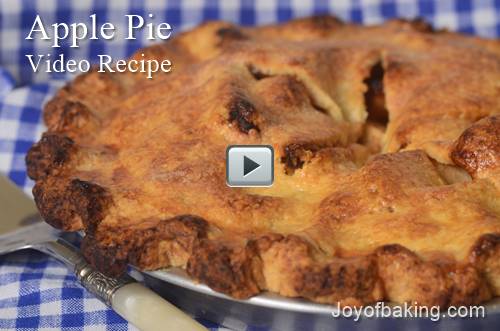 We have reached 1 million subscribers on YouTube! We want to thank everyone for the support. We love you all. If you aren’t a subscriber already be sure to subscribe here. If you haven’t seen our One Million Award Unboxing Video you can view it here.

This Apple Pie has two layers of buttery crisp pastry enclosing slices of tangy sweet apples covered with cinnamon sugar. It is an American classic. While perfect on its own, you may want to try it with a scoop of vanilla ice cream, a dollop of softly whipped cream, or with a slice of sharp cheddar cheese.

We start this Apple Pie by making the Apple Filling. I do this step first, even before I make the pastry, because I like to macerate the apples slices with a little lemon juice, white and brown sugars, and ground cinnamon for about one to two hours. As the apple slices sit, they release their juices. Then we take these juices, along with some cornstarch, and boil them until they’re wonderfully thick and translucent. This flavorful mixture is then added back to the sliced apples and the result is a delicious apple filling. The added benefit of this technique is there won’t be a large gap between the baked apples and the top pastry crust that you often have with apple pies. The gap occurs because apples contain water and as the pie bakes the apples release their juices causing the apples to shrink, which often leaves a large gap between the baked apples and the top crust. Macerating the apples first solves this problem.

As far as what type of apples to use, I like to use a tart tasting apple with a firm texture so it will not lose its shape, and become mushy, when baked. Granny Smith, Honey Crisp, Gala, Golden Delicious, and Braeburn are some year round favorites. And I like to mix two or three different varieties of apples (in this video I used Granny Smith, Honey Crisp, and Gala) which gives a wonderfully complex flavor to the apple filling. Also, during the Fall, try to use locally grown apples as they have superior flavor and texture, and there is the added bonus of supporting your local farmers.

Lastly, when you pull the baked pie out of the oven there is the temptation to cut into it right away. Resist doing this. Fruit pies need several hours to set so that when you cut into them the fruit is juicy but their juices are nice and thick.